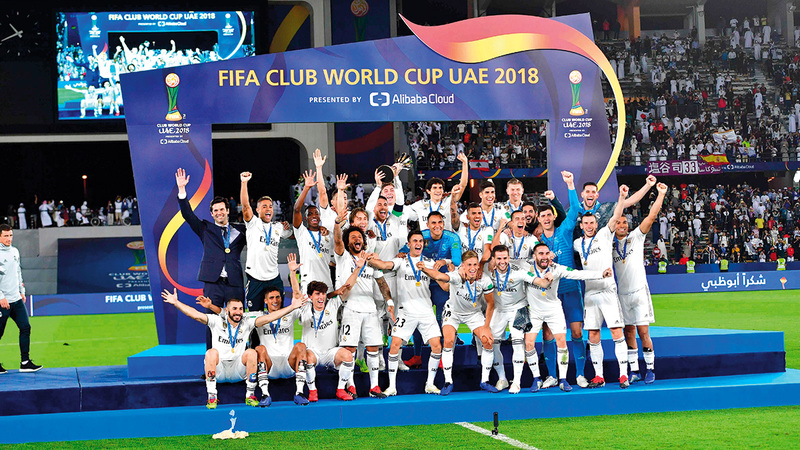 The Club World Cup returns to the arms of the capital, Abu Dhabi, which will host the 18th edition of the tournament from February 3 to 12, and for the fifth time in its history, Abu Dhabi will compete with the Japanese city of Yokohama, for the title of the most hosting cities for the tournament throughout its history since its launch in its current form in 2000.

After the organizational and public success achieved by Abu Dhabi in organizing the FIFA Club World Cup in four previous editions in 2009, 2010, 2017, and 2018, during which the public attendance reached about 641,000 spectators, the International Football Association “FIFA” put its confidence again in the UAE to host the next edition after Japan apologized for Corona pandemic, to become the capital of world clubs and the focus of attention again.

Japan, specifically Yokohama, hosted the Club World Cup eight times previously, followed by the UAE and the capital Abu Dhabi as the most organized city for the event five times with the establishment of the next edition, while Morocco and Qatar hosted the tournament twice each, and once in Brazil in the cities of Rio de Janeiro and Sao Paulo. In the first version in 2000.

Abu Dhabi recorded its first appearance in the 2009 and 2010 editions, after competing with the files of Japan, Australia and Portugal, to become the first Arab city and in the Middle East to host the global event, after four consecutive years in Japan.

The 2009 edition, which bore the number 6, and was held at Zayed Sports City and Mohammed bin Zayed stadiums, witnessed the first participation of five teams in the tournament, led by Argentine Estudiantes, Mexican Atlante, Congolese TP Mazembe, South Korean Pohang Steelers, and Al Ahli Dubai, champions of the UAE League.

The 2009 edition witnessed a change in the tournament system, after a draw for the quarter-finals was held between representatives of the continents of CONCACAF, Asia, Africa and Oceania, unlike what was done previously. The tournament was the face of happiness for the Spanish team Barcelona, ​​which won the title for the first time in its history, amid organizational and public success, as the public attendance in the tournament matches reached 156,350 spectators, an average of 19,544 per match, while the final match was watched at Zayed Sports City Stadium by 53,000 fans.

The next edition in Abu Dhabi in 2010 was on a date with a unique event, with the arrival of the Congolese TP Mazembe, who played for the second time in a row, to the final as the first team outside Europe and South America, and the first African team to qualify for the final match, but he was unable to complete his adventure, and lost in the final Against Inter Milan 3-0, who won the fourth consecutive title for European clubs.

After 2009 and 2010, the tournament was absent before returning to Abu Dhabi again, after winning the organization of the 2017 and 2018 editions, after defeating the files of Japan, Brazil and India that had applied to host the tournament.

In the 2017 edition, Al-Jazira blew a big surprise by reaching the semi-finals, to meet Real Madrid in the semi-finals. Real Madrid’s participation came as the first club in the Club World Cup to enter the next edition, defending its title, which it won in 2016, to achieve its second consecutive title and third in its history by defeating Brazilian Gremio in the final 1-0.

The last edition, which was held in Abu Dhabi in 2018, was on a date with historical events and figures as well, as it witnessed the recording of the largest percentage of goals in the history of the tournament with 33 goals, with a scoring rate of 4.1 goals per game, breaking the previous record of 3.5 goals per match, Shared by Morocco 2013 and Japan 2016.

The goal rate was not the most prominent in the tournament, but the participation of Al Ain, which formed the biggest surprises, after the “leader” became the first Emirati team to qualify for the final, the second Arab team after Moroccan Raja, and the second Asian team also to reach the final, from that victory over a champion South America, Argentina’s River Plate, in the semi-finals, on penalties, to lose in the final against Real Madrid, 1-4, and crown the “Royal” with the third title in a row and the fourth in its history as the most winning club.

■■ Barcelona won its first title in the Club World Cup at Zayed Sports City Stadium in 2009, with 53,000 spectators attending the final match.

■■ 2010 saw TP Mazembe reach the final as the first team outside Europe and Latin America to achieve this feat.

■■ A big surprise for Al Jazeera in 2017, when it reached the semi-finals and lost to Real Madrid.

■■ Al Ain is the first Emirati team and the second Asian and Arab team to reach the World Cup final in 2018.

■■ Real Madrid crowned the third consecutive title and fourth in its history in 2018.