European-Canadian talks centered on sanctions on Russia and energy 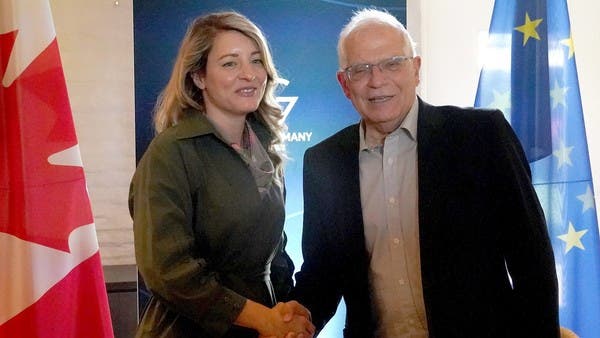 The European Union’s foreign policy representative, Josep Borrell, announced on Saturday that he discussed with Canadian Foreign Minister Melanie Jolie, joint measures regarding sanctions imposed against Russia, in response to its military operation in Ukraine.

Borrell said on his Twitter account that he also discussed with Jolie the diversification of energy and security in Europe in light of the Russian military operation in Ukraine.

Discussed with my friend @melaniejoly our coordinated action on sanctions, energy diversification and security in Europe in view of Russia’s aggression against #Ukraine.

Looking forward to welcoming you in Brussels on Monday for the EU-Canada ministerial Committee Meeting! @G7 pic.twitter.com/y0ipoIBoxn

This comes as the foreign ministers of the Group of Seven countries pledged, on Saturday, to strengthen Russia’s economic and political isolation, continue to supply Ukraine with weapons, and work to alleviate the global food shortage caused by Moscow’s military operation.

After meeting in a 400-year-old palace in the Baltic resort of Weissenhaus, senior diplomats from Britain, Canada, Germany, France, Italy, Japan, the United States and the European Union pledged to continue their military and defense assistance “as long as necessary”.

A joint statement also said that they would also address what they described as “Russian disinformation” aimed at blaming the West for food supply issues around the world due to economic sanctions imposed on Moscow, and urging China not to help Moscow or justify its military operation, according to Reuters. .

They also added, “We will accelerate our efforts to reduce and end dependence on Russian energy supplies as quickly as possible, building on G7 commitments to phase out or ban imports of Russian coal and oil.”

It is noteworthy that the key to putting more pressure on Moscow will be the imposition of an embargo on Russian oil or the gradual elimination of dependence on it.

Next week, EU member states are expected to reach an agreement on the issue, even if Hungary remains opposed to it.

It is noteworthy that US and European estimates also suggested that the Russian military operation in Ukraine, which began on February 24, would continue until the end of 2022.

That operation prompted the West to align itself with Kyiv and support it with weapons, equipment, humanitarian and political aid, while Western countries imposed thousands of sanctions on Moscow, affecting many sectors, as well as hundreds of Russian politicians, parliamentarians, and wealthy Russians close to the Kremlin.