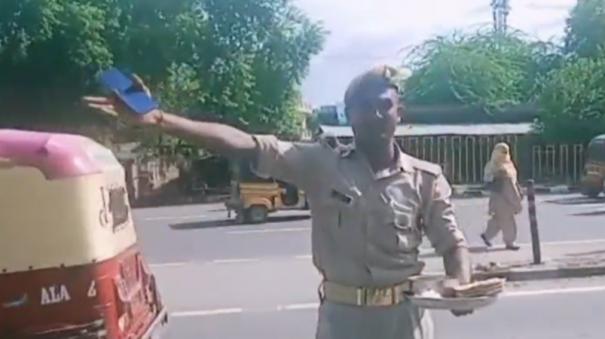 Firozabad: A constable from the state of Uttar Pradesh complained in tears about the quality of food served to them. The video has now gone viral and has garnered a lot of attention.

In the video, policeman Manoj Kumar expressed his displeasure about the quality of food. He held the food offered to him and showed it to the passers-by on the road. He also participated in dharna by sitting on the center median in the middle of the road.

“Even the animals do not eat the food we are given. The superiors of the police department are doing this scam. Due to their actions, the police and the people are being given bad food,” he said.

Manoj also cited Chief Minister Yogi Adityanath’s promise to increase the allowance by 30 per cent to provide nutritious food to the police force.

A UP police constable posted in Firozabad district protests against the quality of food served at the mess in police lines. He was later whisked away. A probe has been ordered. pic.twitter.com/nxspEONdNN

“Higher officials have said that I will be sacked soon. I have informed DGP sir many times regarding this matter. But the solution has not been found,” said Manoj Kumar.

The Firozabad Police Department informed that they are going to investigate the quality of food in this matter. At the same time, around 15 cases of irregularity, continuous absenteeism and negligence are pending against constable Manoj Kumar.

It is to be noted that 15 punishments related to habitual indiscipline, absenteeism and negligence have been given to the said complainant guard in the past years. @Uppolice @dgpup @adgzoneagra