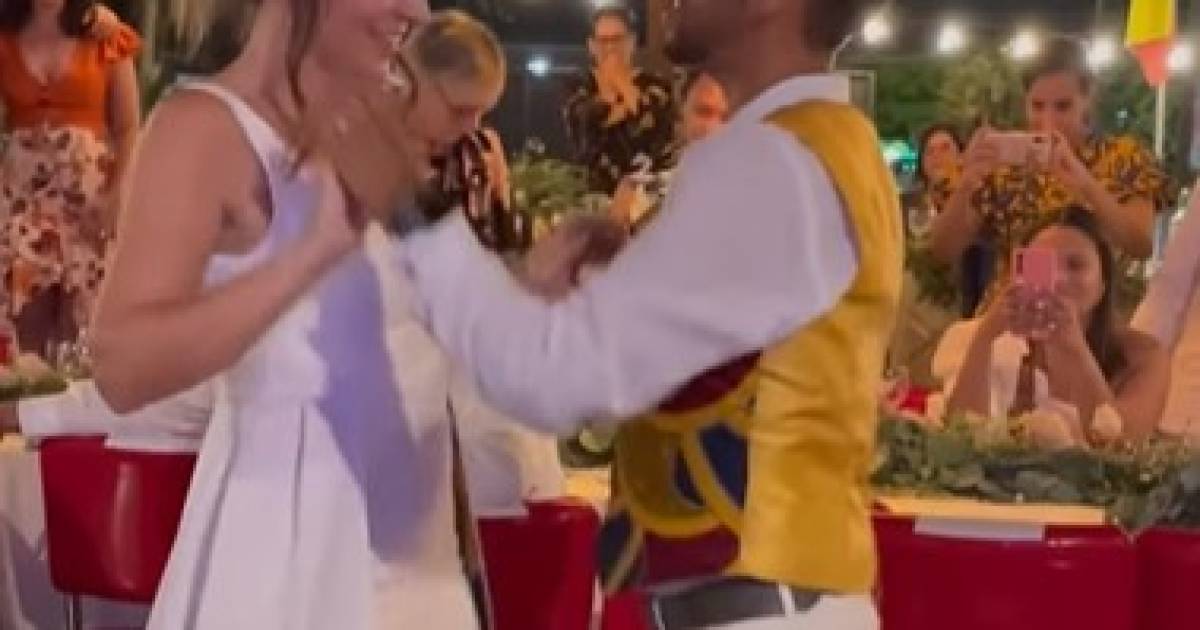 The Dutch Tanja Nijmeijer, known for her fight for the Colombian guerilla movement Farc, got married yesterday. In the city of Cali, she gave her yes to Boris Guevara, just like her a former guerrilla fighter. The Dutch artist Tinkebell was one of the guests.

They swore eternal love to each other in a solemn ceremony attended by family and friends, Colombian magazine reports. semana. According to photographer Alexa Rochi, a former guerrilla fighter who, like Nijmeijer, was involved in the peace agreement between the rebel movement and the Colombian authorities in 2016, Tanja used her mother’s wedding dress. She kept the dress for 50 years, waiting for one of her daughters to get married in it. And look what happened: I finally wear the dress on my 44th,” the magazine heard the Dutch say in a short speech. Her mother was also present at the ceremony.

Nijmeijer and Guevara also celebrated that he recently obtained his diploma in visual communication at the Javeriana University in Calí. “Today I completed a cycle in my life,” said Boris. “I validated my experience in design and communication, forged in the heat of the armed struggle of the former Farc.”

One of the wedding guests was Victoria Sandino, former peace negotiator in Havana, Cuba and former senator of the Farc-derived political party. Fuerza Alternativa Revolucionaria del Comun (Alternative People’s Revolutionary Force), nowadays Comunes called. Sandino referred to the couple’s union on her social networks, assuring that love can be built from peace.

“What a thrill to share the joy of my friends and comrades in celebrating their marriage, all the happiness for them, that peace is a reason to build love,” she wrote on Instagram.

The Dutch Katinka Simonse, better known as the artist Tinkebell, was also present at the wedding. She has been a friend of Nijmeijer’s since last year and was now ‘in charge of the rings’, which she took with her in a box made of Amsterdam city wood. In her column in the Amsterdam newspaper Het Parool she writes ‘never cried so much as last weekend’. In a column from November 2021, she already called Nijmeijer ‘a hero’. At that time, the artist came under a lot of criticism.

Nijmeijer, who in her Farc days was known to the outside world as ‘Alexandra Nariño’, met her future husband in 2013 during the peace negotiations in Cuba. After a relationship of nine years, they decided to get married.

Nijmeijer joined the Farc in 2002. During a tour through Colombia, the then 24-year-old Denekampse was impressed by the social injustice of the poor peasant population. After completing her studies in Romance languages ​​and cultures in Groningen, she returned to the South American country. With her accession she thought she could fight for the ‘good cause’, but the guerrilla movement turned out to be engaged in illegal and punishable practices. ‘Ellen’, her nickname among the guerrilla fighters, radicalized and was involved in, among other things, attacks in the Colombian capital Bogota. In 2007, her diary was found after an attack by the Colombian army on the former guerrilla camp where she had been staying.

Most of the approximately 7,000 guerrillas surrendered their weapons after the peace agreement in 2016. This put an end to terror that had lasted more than half a century. Nijmeijer turned her back on her former combatants at the beginning of 2020.

A prominent female politician from the party of Colombian ex-president Iván Duque called the Dutch a liar in May last year. The ex-guerillas reported on Twitter about violence by the national police and the army against the indigenous population during anti-government demonstrations.

Nijmeijer’s autobiography was published at the end of last year. In it, she looked back on her Farc days and said that her future lies in Calí, where she, together with Boris and a few other people, has set up a cooperative enterprise that aims to promote the sale of agricultural products.