Eye trainer: I drank ginger ale because my throat got tired of screaming 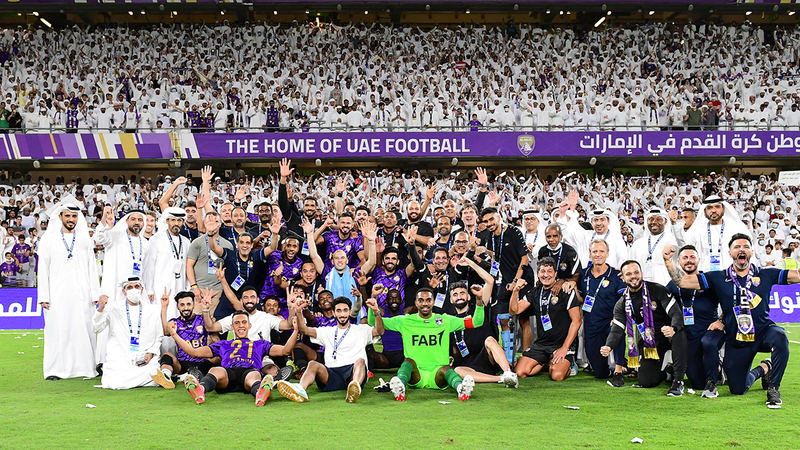 Rebrov confirmed to “Emirates Today”, in response to the reason for drinking a drink while he was in a press conference broadcast live, and explained that he “eats hot ginger in order to restore his voice after his throat got tired of screaming during the celebration of the league title with the team players,” stressing at the time Himself that he also needed to guide the players during the times of the match, which he described as not being easy.

The Ukrainian confirmed that his team deserved to win the league title thanks to the hard work throughout the season, which was in the spirit of one family, pointing out that his players did their best to win the title of competition and that all these factors confirm that they deserve this title.

The coach praised the public support they received throughout the season, and said: “Al Ain fans deserve to win and be happy because they contributed to the club’s achievements through its strong support for the team throughout the season inside and outside our stadium, as well as the management of Al Ain Club, which created the reasons for winning titles that deserve to be crowned and this harvest comes at the end of the season.” season”.

The coach did not respond clearly to the possibility of renewing his contract, which expires with the team next month, at a time when the management of Al Ain Football Club, led by Dr. League clubs, by building a squad of young and experienced players that gave the team crowning the League and League Cup titles.

Rebrov said: “I am very happy in Al Ain, and I still have a month left of my contract with the club, and I am proud of the results I achieved and the support I received from everyone here. I have not renewed my contract until now, but I promise not to sign for any club in the Emirates except for Al Ain. To discuss some details related to renewing my contract with the club during the coming period.”

Over the past three seasons, and specifically since the departure of the former Croatian coach Zoran, the Al Ain administration has been looking for a coach capable of keeping pace with aspirations. Rebrov showed his success early, as he was able to equalize the best start for Al Ain in the history of his participation in the professional league by winning the first four consecutive rounds, And registered in the name of Zoran.

The results that the team achieved under the leadership of Rebrov led to monopolizing the award for the best coach offered by the Pro League since the beginning of the season, by winning it seven times in a row, after collecting 1,835 points, surpassing the coach of the Al-Jazira team, the Dutch Marcel Kaiser, who has 1,236 points, and a team coach. Baniyas, Romanian Daniel Isila, 1207 points.

In response to the numbers achieved by the team under his leadership, including the equation of his predecessor Zoran’s start, the coach said: “For me, I do not think about numbers, but rather improve the quality of the team and change the mentality to be always offensive. I am happy with everything I have achieved with the team.”

And about the match that gave him the feeling of approaching the league title, he said: “For me, getting close to the title was not important in any match, as much as focusing and doubling efforts in order to appear strong, and the most important thing for me is to improve the level and develop the team’s performance, which is the main goal that is consistent with my philosophy in training. ».

The head of the UAE Pro League, Abdullah Nasser Al-Junaibi, said that “Al Ain’s decision for the league title, three rounds before the end of the competition, translates to Al Ain’s merit to win the title.” He said in a press statement, “This was achieved thanks to the great efforts made by all of its members, including administrative and technical bodies, players and fans, as these elements were completed in the wonderful painting on which Hazza Bin Zayed Stadium appeared, on the night of winning the title.”

Al-Junaibi considered that the association has endeavored throughout the current season to implement the highest regulatory standards for all professional competitions.

• Rebrov confirmed that a month remains in his contract with Al Ain, and promised not to sign for any club in the Emirates other than the “leader”.

• The Ukrainian coach monopolized the award for the best coach since the beginning of the season.. He created for Al Ain a strong team of young and experienced people.