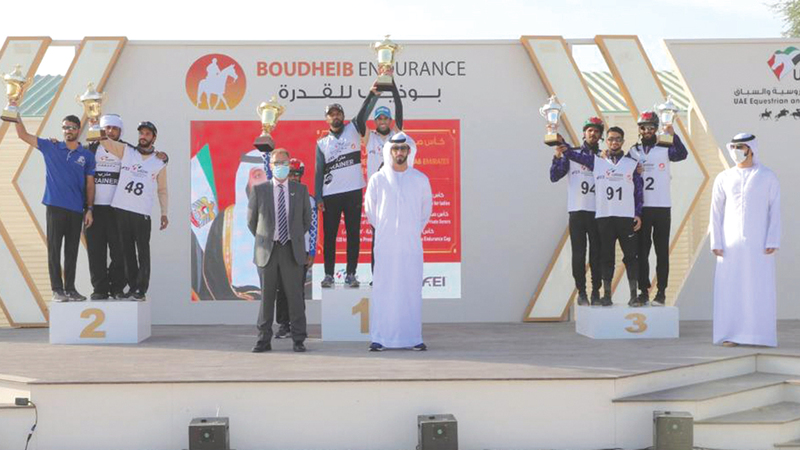 The jockey, Fahd Ali Hassan, on horseback “Bronx” of Seih Al Salam 2 stables, was crowned the champion of the President’s Cup for Endurance Riding (two stars) for a distance of 120 km, according to the international classification, which was held yesterday in Boudheib International Endurance Village. The jockey, Fahd Ali, dominated the race, in which 66 male and female knights participated, in the last two stages, recording a time of 5:44:24 hours, and an average speed of 20.90 km/h.

The jockey Ahmed Ali Al-Marzouqi on horseback “Arabik Rafik” of the Hadiba Al-Salam 2 stables won the second place, with a time of 5:47:45 hours, and the jockey Muhammad Saif Al-Farsi on the “Caesar Dama” horse of the Commandos Stables 3 came in third place with a time of 6:05:04 hours.

The jockey Ahmed Saleh Al-Sharaf on the “Chamber Victor” horse from Al Barari Stables won first place in the President’s Cup race, which was held in accordance with the provisions of the Boudheib Protocol, with 212.02 points. The jockey Muhammad Ali Amin on the “Daktayel Dagwi” horse from Al Barari Stables came in second place, with a score of 182.33 points, and the jockey Omar Ibrahim Al Marzouqi on horseback “Boba” of the Commandos Stables came in third place with 181.21 points.

The owner of the events, organized and supervised by the Equestrian and Racing Federation, was an international race for a distance of 100 km (star) held on the sidelines of the main race, and was crowned by Bahraini jockey Shahd Waleed on the “Alevik de Vikadi” of Victorious Stables, recording 4:52:47 hours. The winners were crowned by Ahmed Al Suwaidi, Executive Director of the Equestrian Federation, accompanied by Kim Elliott, Director of Abu Dhabi Equestrian Club.

The festival included the private stables race for 101.5 km, and the women’s race for 101.5 km, each of which was held over four stages, and valuable financial prizes were allocated for the three races, amounting to a total of two million and 300 thousand dirhams.