Famine threat looms large over half of Pakistan: Report 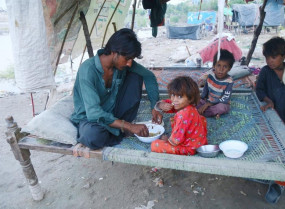 Digital Desk, Islamabad. A new report has warned that half of Pakistan could face famine if food supplies are not arranged from outside sources amid floods across the country. According to Sama TV report, the report compiled by agencies of the Ministry of National Food Security and Research states that the floods have destroyed at least 70 percent of Pakistan’s food supply, which means that the population needs to be protected from famine. Food items should be imported soon.

The gravity of the situation can be gauged from the fact that in Sindh and Balochistan, according to the initial assessment done by the government, about 95 percent of the crops have been completely destroyed by the floods. Meanwhile, in Punjab and Khyber Pakhtunkhwa nearly a third of the crops were washed away by the floods. Due to which about 40 million people in Pakistan may have to face food shortage. According to food agencies, urgent measures are needed to end the food shortage and save lives.

The prices of fruits, vegetables and other basic food items are also skyrocketing due to disaster and loss of produce. To restore the supply chain, the country will have to import essential food items like wheat, pulses, spices and sugar. According to a Sama TV report, importing roughly 7 million tonnes of wheat will cost the national exchequer about $3.5 billion. Whereas, imports of 600,000 tonnes of sugar, 100,000 tonnes of spices and one million tonnes of pulses and palm oil will also increase the cost. Food agencies have asked the government to take prompt measures to support the flood-affected population with essential supplies to avoid a massive humanitarian crisis.