Famous writer Salman Rushdie was attacked in New York, the attackers stabbed him and injured him 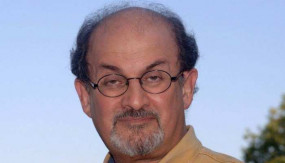 Digital Desk, New Delhi. After the news of the deadly attack on the famous writer Salman Rushdie, there has been a stir around the world. According to reports, Rushdie was on his way to give a lecture at Chautauqua, near Buffalo, New York. Then even before going on stage, the attackers stabbed him with a knife and badly injured him. According to ANI News, a bounty of USD 3 million was also announced recently for those who killed Rushdie.

Significantly, Salman Rushdie was born on 19 June 1947 in Mumbai. It is said that Rushdie was always in the discussion about his books and marriages. Salman Rushdie did four marriages, but the relationship did not work out with even one. Salman Rushdie’s father is Anees Ahmed Rushdie and mother is Negin Bhatt. Both of them moved to Britain shortly after the birth of Salman Rushdie. Where he took his early education at Rugby School in England. He then studied history at the University of Cambridge. Before becoming a litterateur, Salman had worked as a copywriter in two advertising agencies.