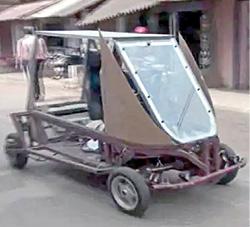 A farmer from Odisha has designed a solar powered car. 300 km on a single charge. Can travel long distances.

Prevent corona spread General freeze I was paralyzed at home because it was implemented. Then I started reading some books. Fuel prices continued to rise after the general relaxation of restrictions.

Then came the idea of ​​making an electric car. I read some books related to this. I watched some videos on U-Tube. Then I set up a workshop in my home and started making electric car.

I have designed this car to run on solar powered battery. I made this car on an 850 watt motor, 100 AH / 54 volts battery. It has a range of 300 km on a single charge. Let’s travel the distance. This takes 8.5 hours to fully charge the battery. Since the battery is slowly charging, it will work for up to 10 years.

I finished all the work of making this car at my home workshop. 2 mechanics assisted for this. My friend also gave advice regarding electrical works. Thus he said.

Gopal Krishna Das, Regional Transport Officer, Mayurbhanj, said, “I am delighted to learn that Sushil Agarwal designed and built a solar-powered car. The future of the industry lies in such environmentally friendly vehicles. Society should encourage such innovations. ”

It has been 3 months since the car was made, but it is still in its infancy. The government should come forward to improve such innovations.