Fatwas are being used as a political weapon: Kerala Governor Arif Mohammad Khan 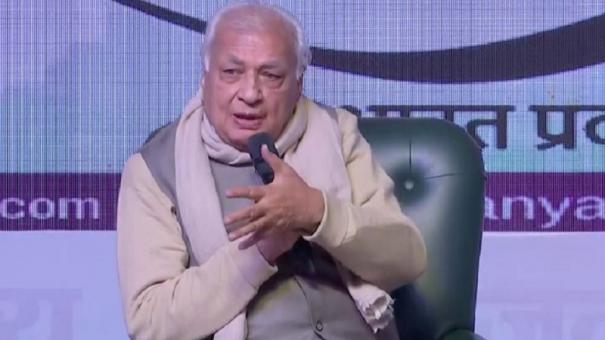 New Delhi: Kerala Governor Arif Mohammad Khan has said that religious decrees called Fatwas issued by Islamic clerics are being used as a political weapon. Speaking at an event organized by Panjajanya, a weekly magazine of the RSS organization in Delhi, Governor Arif said this.

From the speech of Kerala Governor Arif Mohammed Khan.. Religious decrees called fatwas issued by some Islamic clerics are used as political weapons. In fact, Islam condemns such fatwas as being imposed by unbelievers. These are called Kufr (Kufr’ Fatwa).

In Islam, the clergy were created by various kings. Kings created such clergy to get religious approval for their laws. To tell the truth, after the death of Prophet Muhammad, Islam was taken over by kings and politicians. It is clearly mentioned in more than 200 places in the Quran that it is our Creator who determines what is right and what is wrong. So fatwa is given by Islamic clerics and not by the Messenger of God. I even got a fatwa for speaking in Hindi in my youth. That’s why I say fatwa is a political weapon used for political reasons. This is what he said.

This is the difference between me and Pinarayi: Continuing, he said, “The issue of Citizenship Amendment Act started when I took office as the Governor of Kerala. The Government of Kerala could not accept the intervention of a Constitutional Office in this matter. But having taken an oath to protect the Constitution, I could not remain silent and watch it being attacked. I did my constitutional duty. I supported CAA to do. I made it clear to the CM of Kerala that I am doing my duty. There is no personal conflict between me and Pinarayi Vijayan. There is one difference between me and him. Pinarayi, if you are a communist I am also a believer in no religious system. I believe only in spirituality. That is dharma. “Dharma means acting responsibly,” he said.