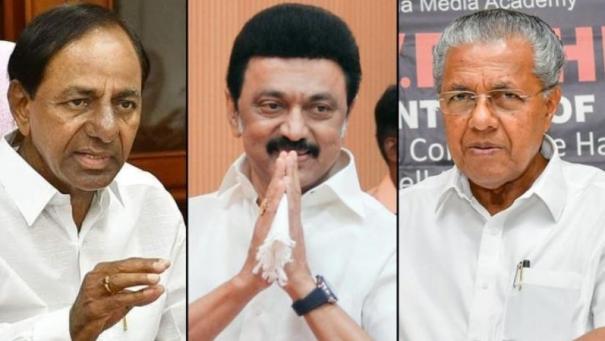 New Delhi: Prime Minister Narendra Modi in his speech at the national flag hoisting at the Red Fort in Delhi on the occasion of the 76th Independence Day of the country said, “There are many states in our country who have played a major role in taking the country forward, led and worked as an example in many fields. This strengthens our federal philosophy. But the need of today, we “We need cooperative federalism and cooperative federalism with competition. Development requires competition.”

Despite the Prime Minister’s speech, opposition chief ministers from non-BJP-ruled states, in their Independence Day speeches, implicitly slammed the central government’s financial contribution, expressing the need for a truly cooperative federal state to advance development. Here is a collection of Independence Day speeches of some Chief Ministers from non-BJP-ruled states…

Kerala Chief Minister Pinarayi Vijayan: “Federalism is the bedrock of the Indian Constitution and the basis of the country’s existence. This should be kept in mind especially in financial matters. Only if necessary funds are provided for the development of the states, the people can enjoy its benefits. Poverty and homelessness are the major problems of large sections of the society and must be put to an end.” He indirectly criticized the central government’s financial contribution.

Tamil Nadu Chief Minister M. K. Stalin: “The colors of the national flag, though three in number, are seen as united in one scale. Similarly, living together in spite of various differences will save India. Internal unity is essential to defeat the onslaught of external forces. This can be our true tribute to the brave men who gave their lives and fought for India’s freedom.

Let us all come together and live in unity to move the history of 75 years of independence India upwards. We will enrich united India through self-sufficient states in all sectors.” Chief Minister Stalin’s speech seemed to reiterate the slogan of Union Government.

Delhi Chief Minister Arvind Kejriwal: “Education and medicine are not free, access to both can eradicate poverty in a single generation. How did countries like USA, Canada, Germany, Denmark become rich? They arranged good education and health facilities for their citizens. Similarly we will make India the number one country. The tricolor will fly high only when every Indian gets good healthcare and education.” Last month, Kejriwal made the remarks in his Independence Day speech in response to Prime Minister Narendra Modi’s reference to the Aam Aadmi Party government’s “revdy culture” of giving out freebies to win votes.

Punjab Chief Minister Bhagwat Singh Mann: “People of Punjab must wage a war against social ills like unemployment, corruption and communalism to realize the dreams of freedom fighters and make the state vibrant again. Questioning martyrs’ certificates is an unforgivable offence. Even after 75 years of independence, the dreams of freedom fighters like Bhagat Singh and BR Ambedkar are still unfulfilled.

People had a lot of faith in the successive governments that took over the state after independence, but most of them shattered this faith.” He said in his speech.