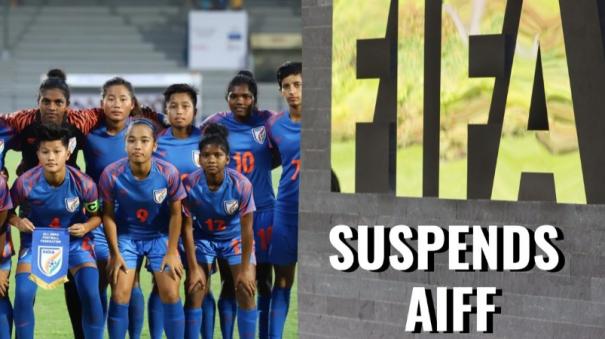 In a statement issued by FIFA in this regard, “The FIFA Council has unanimously decided to suspend the All India Football Federation with immediate effect due to the undue influence of third parties in serious violation of the laws of the International Football Confederation.

Due to this ban, India has lost the right to host the Under-17 Women’s World Cup football series. The series was scheduled to be held from October 11 to 30 across 3 cities in India. FIFA said it is evaluating the next steps regarding the Under-17 World Cup and will refer the matter to the council if necessary.

FIFA also said it is in constant constructive contact with the Indian Ministry of Youth Affairs and Sports. Thus, there is hope that a positive result can be reached in this matter.

On May 18, the Supreme Court removed Praful Patel, the president of the All India Football Federation, from that position. The Supreme Court had pointed out that Praful Patel had not taken steps to conduct the election of administrators in December 2020.

Also, the court ordered that the Women’s World Cup should be held in India and steps should be intensified. Following this, the committee set up a 12-member advisory committee to look into matters related to international football. Following this, a report containing the new rules was also filed in the Supreme Court.

What is the background?

According to the rules, the president of a sports federation can continue for a maximum of 12 years. Against this, a case was filed in the court by former goalkeeper and current BJP leader Kalyan Chaubey. Praful Patel had refused to resign from his post citing this reason.

Why the FIFA intervention?

The Supreme Court had said that representatives of 36 state associations and representatives of 36 famous footballers will vote in the elections to the governing body of the Football Federation of India. The names of Paichung Bhutia and IM Vijayan were also included in the list of players.

Several state football associations protested some of the new rules, including giving 50 percent of voting rights to ex-players. Alleging that these rules are absurd and discriminatory, they wrote a letter to FIFA in this regard.

Following this, FIFA wrote to the Sports Ministry of India saying that the inclusion of individuals in the voting rights of the Indian Football Federation is not acceptable. As a result, FIFA has banned the All India Football Federation.

Due to FIFA’s ban, Indian Football Federation representatives and clubs cannot participate in any international football matches. Also members or officials of the confederation are not allowed to attend trainings organized by FIFA and Asian Football Confederation