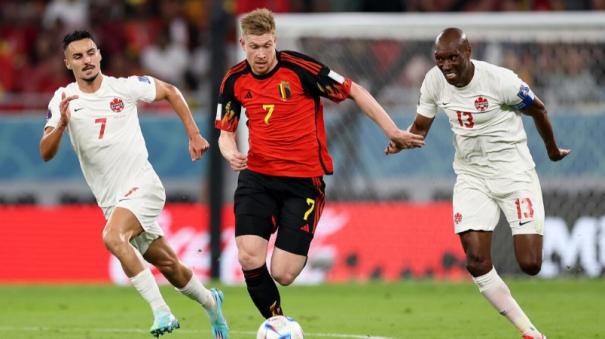 The FIFA World Cup football series is being held in Qatar. Belgium and Canada clashed in a Group ‘F’ league match at the Ahmed Bin Ali Stadium in Al Rayyan, West Doha yesterday midnight. Belgium star player Romelu Lukaku is out due to injury. After 36 years, Canada’s fans were in high spirits as they made their debut in the World Cup.

Team Canada also had a good start. Jonathan David’s attempt to score in the 7th minute was wasted. In the 11th minute, Dajon Buchanan’s shot was blocked by Belgium player Yannick Carrasco. This gave the Canadian team a penalty.

But the team failed to take advantage of this. Belgium goalkeeper Thibaut Courtois made a brilliant save from Alphonsa Davies’ penalty chance. As a result, Belgium escaped from scoring. Canada continued to put pressure on Belgium’s defense to continue attacking. Thibaut Courtois was strong in front of the goal post and repeatedly thwarted Canada’s scoring attempts.

In the 44th minute, forward Michy Batshuayi took a long-range shot from Belgium’s Toby Alderweireld and dribbled past two Canadian defenders to score. This gave Belgium a 1-0 lead in the first half.

Both sides had scoring chances in the second half, but neither team managed to score. Canada carried the ball towards the goal several times and posed a serious threat, but were unable to convert it into goals. In the end, Belgium won 1-0.

After 36 years..: Team Canada made its World Cup debut in Mexico in 1986. Canada lost all 3 games of the league round in that series. In these 3 matches, the Canadian team failed to score a single goal. Alphonsa Davies missed an easy chance to score in Qatar’s first World Cup appearance after 36 years.

Wall…: Belgium’s Thibaut Courtois, who is known as the best goalkeeper in the world football arena, has thwarted the opposition’s scoring chances 6 times in the last 10 spot-kicks he has faced. Thibaut Courtois’ role in Belgium’s win against Canada was immense.