Finally, after a long silence, China reveals the location of its terrifying missile 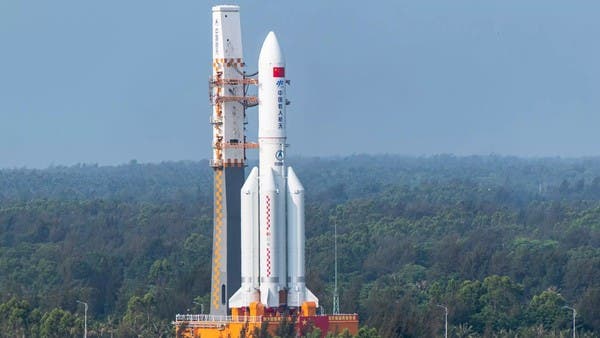 Beijing emerged from a long and embarrassing silence that was accompanied by the Chinese space authorities and diplomacy.

“Due to the technical design of this missile, most of its components will be burned and destroyed during the return to the atmosphere,” Chinese Foreign Ministry spokesman Wang Weinpin said during a regular press conference.

He pointed out that “the possibility of causing damage to air activities or (people, facilities and activities) on the ground is very small.”

The Chinese media devotes, on Saturday, the minimum coverage of the event, and only includes the statements of the spokesman for the Foreign Ministry.

From the launch of the stray Chinese missile

It falls in international waters by the sea

The Chinese newspaper Global Times said Wednesday that the debris of the missile will likely fall into international waters, amid fears that it will cause damage when it re-enters the Earth’s atmosphere.

Concerning the return of the remnants of the “Long March 5B” missile, which carried the main technical unit of the Chinese space station into orbit, to the atmosphere, Chinese space experts told the Global Times newspaper earlier that the structure of the missile was like “thin skin and a lot of stuffing”, and after fuel consumption Inside the missile during the launch process, the remaining pieces of the missile body are not large. In addition, since the missile body is mainly made of aluminum alloy, most of it will burn easily in the atmosphere. Therefore, compared to space stations or large satellites, it is less likely that the remnants of the rockets will cause harm to Earth. At the same time, the flight path of the missile is not “out of control” as some media have reported. It has been calculated precisely, and its flight time in orbit is intentionally shortened by passivation.

Some Western media recently “collectively” exaggerated allegations of “the out of control Chinese missile threat.” As the British newspaper “The Guardian” reported on May 4 that after separation from the main unit of the space station, the debris of the Chinese missile became orbiting the Earth at a speed of about 27 thousand kilometers per hour. From the standpoint of the flight position, the missile debris is out of control, which could pose a threat to the Earth. “

In this regard, Song Chung Ping, a Chinese space expert, responded to the Global Times on Wednesday, saying that in general, this is another exaggeration of the so-called “Chinese space threat” adopted by some Western powers, which is an old and traditional ploy used by anti-China forces everywhere. Once they see technological breakthroughs in China, because that makes them more nervous. “

If parts of the missile remain complete after entering the atmosphere, there is a high probability that they will disintegrate in the sea because the planet is 70% water. But the hypothesis that it fell on a populated area or a ship at sea remains valid.

Over the weekend, the Chinese missile enters the Earth’s atmosphere in an uncontrolled way, while China and many experts believe that the hypothesis that it causes damage on the ground is very small.

On April 29, China put into orbit the first components of its future space station with the “Long March 5B” missile, China’s most powerful missile.

It is expected that the first layer of this missile, which is still in Earth orbit, will return to a point where it is difficult to predict its location on Earth.

According to recent forecasts by the US Department of Defense, the Chinese missile will enter the atmosphere on Saturday around 23:00 GMT.

However, these expectations are accompanied by a large margin of error of up to nine hours. These predictions are expected to increase in accuracy as the missile approaches the atmosphere.

“We hope that it falls in a place where it does not harm anyone,” said Mike Howard, a spokesman for the US Department of Defense, stressing that the United States is tracking the missile’s path.

And US Defense Secretary Lloyd Austin confirmed this week that his country never intends to destroy the missile, but hinted that China had not planned enough carefully to launch it.

There is a possibility that the heavy missile fragments will reach a populated area, but that is unlikely, according to several experts surveyed by Agence France-Presse.

Experts warn of a threat # Beijing The American space industry in the foreseeable future … and “Fox News”: The Chinese missile may cause no harm when it falls to the ground#Arabic pic.twitter.com/fshnKH7O3Y

“Given the size of the missile, large parts of it will remain,” said Florent Delevi, astronomer at the Paris-BSL Observatory.

However, the probability that it will infect a populated area is “very small, probably less than one in a million,” said Nicholas Bubrinsky, head of engineering and innovation at the European Space Agency.

But the idea of ​​a ton of metal shrapnel pouring onto Earth at hundreds of kilometers an hour is not good practice, and China should reconsider the design of the Long March missions, said Jonathan McDowell, an astronomer at the Harvard-Smithsonian Center for Astrophysics and an expert on space debris. 5 me to avoid it. “

This is not the first time that China has lost control of a spacecraft upon its return to Earth. In 2020, shrapnel of another Long March missile fell on towns in Ivory Coast, causing damage but no casualties.

China is investing billions of dollars on its space program to catch up with Russia and the United States in this area.

The giant Asian country sent its first Chinese citizen into space in 2003. In early 2019, it put a vehicle on the dark side of the moon, in a global precedent.