First death from Omicron in the country, elderly person was fully vaccinated 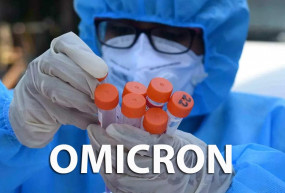 Digital Desk, Sydney. A fully vaccinated elderly person in New South Wales (NSW) Australia has become the first person to die due to the Omicron variant of COVID-19. 520 patients are hospitalized in the country due to corona virus. The Sydney Morning Herald reported that the 80-year-old man died at Westmead Hospital and was a resident of the Uniting Lillian Wells Aged Care Facility in North Parramatta, western Sydney, where he tested positive.

He was fully vaccinated, but the health condition was not going well. NSW Health’s Christine Selvey said the man is believed to be the first person to die in the state after being infected with the Omicron variant and urged people to go ahead for a booster or a third dose if they are eligible. According to federal government data released last week, 33 residents and 11 staff members at the North Parramatta Aged Care Facility have recently been infected with COVID-19.

The report said that on Monday, 520 COVID-19 patients were in hospital, of whom 55 were in intensive care in NSW, as 6,324 new cases were reported. Two other deaths due to COVID-19 were reported: a woman in her 90s who died at Wyong Hospital and a man in his 80s who died at the Royal Prince Alfred Hospital. Both had received two doses of the Kovid-19 vaccine. Meanwhile, Health Minister Brad Hazard said everyone in Australia would get Omicron at some stage.

This is putting enormous pressure on the other staff in our hospitals, he said. Hazard said those who tested positive and did not have to go to the hospital would be able to leave the isolation after 10 days if they were symptom free. “You can leave your home because we know your chances of being contagious at that point are very low,” he said. South Australia has abolished the requirement for PCR testing for incoming travelers, while increasing restrictions for venues and home gatherings, but is asking visitors to take rapid antigen tests.

The NSW Government is expecting pressure on COVID-19 testing centers in the new year after people have their travel plans in place. Senior ministers are in discussions about procuring more rapid antigen tests to deal with the ongoing demand, with an announcement expected soon.