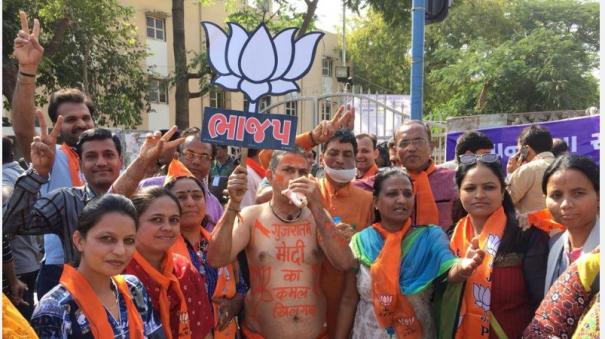 Gandhinagar: As the first phase of polling for the Gujarat assembly elections will take place on December 1, campaigning will come to a close this evening.

In this election, there is a three-way contest between the ruling BJP, the Congress and the Aam Aadmi Party.

In this case, the constituencies where the first phase of polling will take place are in Saurashtra, Kutch and South Gujarat regions. Out of 89 constituencies, 25 constituencies including Maninagar, Morbi, Godhra are considered as VIP constituencies. Prime Minister Modi, Delhi Chief Minister Arvind Kejriwal, Congress President Mallikarjuna Kharge and others are actively campaigning here.

The BJP, which has ruled Gujarat for six consecutive terms since 1995, is making serious efforts to retain power for the seventh term. Prime Minister Modi has spent more days camping and campaigning than in previous elections.

In the BJP’s election manifesto, promises like employment for 20 lakh people, implementation of General Civil Code, food at Rs.5 in 100 places, free scooters for college girls and free bicycles for school girls have been made.

In the Congress election manifesto, promises have been made including employment for 10 lakh people, loan waiver for farmers, 300 units of free electricity per month.

All the subsidy schemes implemented in Delhi will also be implemented in Gujarat. Education and health services will be provided free of charge. The Aam Aadmi Party has made promises including Rs 1,000 monthly stipend for women above 18 years of age.

Campaigning in all the 89 constituencies where the first phase of elections will take place will end this evening. Dec. Voting will take place on 1st. Dec. The second phase of polling will be held on 5th.

BJP won 99 seats in the last assembly elections. Congress won 77 seats. This time the Aam Aadmi Party is also contesting seriously, and the election field has heated up.

In this case, the results of the opinion poll jointly conducted by India TV and Matrix were published yesterday. Out of total 182 constituencies, BJP will win 117 seats, Congress will get 59 seats, Aam Aadmi Party will get 4 seats and other parties will get 2 seats.

Kolis constitute 24 percent of Gujarat’s population. They are the power to decide victory and defeat in 84 constituencies of the state.

Next to this, the Patel community has 12 percent. Many senior BJP leaders, including Gujarat Chief Minister Bhupendra Patel, belong to the Patel community. Apart from this, there are 14.75 percent tribals, 6.74 percent scheduled castes and 26 percent general castes. Also, 9.67 percent of Gujarat’s population is Muslim.

Keeping this in mind, candidates belonging to all communities have been given equal space in the list of candidates of BJP, Congress and Aam Aadmi Party.