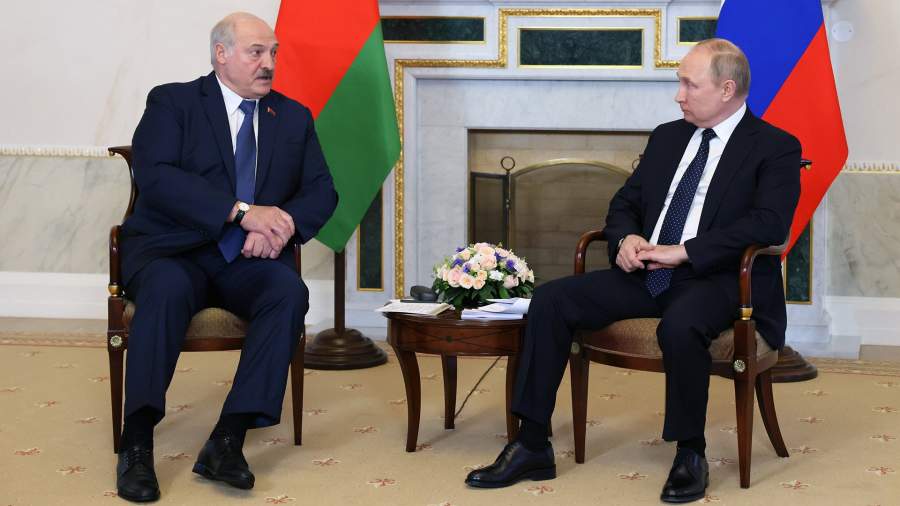 Russia will transfer to Belarus Iskander-M missile systems, which are capable of carrying, among other things, a nuclear warhead. Vladimir Putin stated this on June 25 at a meeting with Alexander Lukashenko in St. Petersburg. Besides, The Russian president proposed to retrofit the Su-25s in service with the Belarusian army. At the same time, Minsk does not demand the transfer of nuclear weaponsand, above all, is interested in the modernization of aircraft for nuclear warheads – this is due to the intensification of NATO training flights with the same warheads. Why Russia decided to strengthen the military potential of the neighboring country and what other issues were discussed in the Konstantinovsky Palace – in the material of Izvestia.

More recently, before the last presidential elections in Belarus and the protests of those who disagreed with their results, Alexander Lukashenko was sometimes accused in the public field of trying to “sit on two chairs”. Now the situation has changed dramatically: the head of the neighboring republic, especially in recent months, has been demonstrating his commitment to building close relations with Russia. Wherein The Republic of Belarus, in fact, turned out to be the only country in the post-Soviet space that openly supports Moscow after February 24th. By the way, it is precisely for the pro-Russian vector in the current situation that the countries of the collective West are constantly strengthening sanctions against the republic..

And although Minsk has not yet officially recognized the sovereignty of the DPR and LPR, the approach of Belarus differs markedly from the actions of other countries in the region. For example, other allies of the Russian Federation in the CSTO (Armenia, Kazakhstan, Kyrgyzstan and Tajikistan) did not vote in March against the resolution adopted by the UN General Assembly, which calls on Russia to immediately stop hostilities on the territory of Ukraine. In addition, it is enough to recall the recent statement by the President of Kazakhstan, Kassym-Jomart Tokayev, who called the republics in the Donbass “quasi-states.” However, this is not evidence that Russia has found itself isolated on the world stage, as many European politicians claim, but only shows how close the positions of Moscow and Minsk have recently been.

The regularity of meetings between Vladimir Putin and Alexander Lukashenko this year is really impressive. At the same time, it is interesting that the communication of politicians takes place exclusively on the territory of Russia. The head of the Russian Federation has not visited the neighboring republic since the moment when the world faced the coronavirus pandemic. However, it is worth noting that Vladimir Putin as a whole began to occasionally leave the country. Since March 2020, he has visited only Switzerland to meet with the head of the White House, Joe Biden, went on a working visit to India at the end of last year, and at the beginning of this year, to China, where he took part in the opening ceremony of the Winter Olympics.

The unwillingness of the Russian president to travel abroad once again, however, does not affect relations with Belarus in any way thanks to the activity of Alexander Lukashenko. For him, the current trip to Russia has already become the sixth this year. It is noteworthy that this time the politicians, even before the official negotiations in the Konstantinovsky Palace, spent two days together (June 23 and 24) at the residence in Zavidovo, where their communication took place in an informal setting.. Actually, after the start of the meeting in the Northern capital, which took place on the day of the 30th anniversary of the establishment of diplomatic relations between the two countries, it became clear why Vladimir Putin and Alexander Lukashenko needed several days to discuss issues on the international agenda and bilateral cooperation.

The most serious weapon

— Vladimir Vladimirovich, we are very annoyed by the situation and the policy pursued by our neighbors.. You, in general, know that this is the leadership of Poland and the leadership of Lithuania. The policy of confrontation. And you have enough of them, especially in Ukraine: recently, most of the mercenaries, as we notice, are from Poland– said Alexander Lukashenko. — Same for Lithuania. Recently, there has been a growing flow of information about their plan to stop transit from Russia through Belarus to Kaliningrad, to isolate Kaliningrad. Listen, this is akin to declaring some kind of war already, such things are unacceptable in modern conditions..

At the same time, the Belarusian leader commented in a negative way not only on the behavior of Warsaw and Vilnius, but also The United States and NATO in general, which, as Lukashenka noted, conduct training flights of aircraft capable of carrying nuclear warheads. In this regard, the Belarusian President asked his colleague consider the possibility of a mirror response to what is happening. But, as he himself emphasized, this must be done “without busting.” Then he explained that Minsk does not require the transfer of nuclear weapons, but, first of all, is interested in modernizing aircraft for nuclear charges..

“I do not hide it, I am raising the question that we could be ready for anything, even for the use of the most serious weapons in order to protect our Fatherland from Brest to Vladivostok,” Alexander Lukashenko specified.

Vladimir Putin, apparently, was ready for such a turn of the conversation in the presence of journalists. Thus, the Russian president recalled that the Americans have 200 nuclear tactical ammunition in the European member countries of the North Atlantic Alliance. At the same time, 257 aircraft have been prepared for their possible use, he added. Military expert Viktor Litovkin clarified in an interview with Izvestia that the American B61 atomic bombs are deployed at bases in Turkey, the Netherlands, Italy, Germany and Belgium.

On this background The Russian President agreed to start modernizing the Su-25 aircraft, which are in service with Belarus. Their additional equipment will be carried out at aircraft factories in the Russian Federation, Vladimir Putin stressed. Also, the Russian side will begin the appropriate training of flight personnel.

– And the second. As we agreed, you raised the issue, we have made a decision: in the next few months, we will transfer to Belarus the Iskander-M tactical missile systems, which, as you know, can use both ballistic and cruise missiles, both in conventional and nuclear versions– the head of the Russian Federation emphasized.

Despite the fact that many experts are now probably even more likely to talk about the approach of the Day of Judgment, Viktor Litovkin believes that the current state of affairs is not even worth comparing with the Cuban Missile Crisis of 1962, which, as everyone knows, was resolved successfully.

– Then it came to a potential direct exchange of nuclear missile strikes. So far, there is no such tension between Moscow and Washington, between Russia and NATO,” he noted.

In the Konstantinovsky Palace, economic issues were also discussed, which somewhat faded into the background. Although it is trade relations between Russia and Belarus that are more important than ever in the face of unprecedented sanctions pressure from the US, the EU and their closest partners. In particular, Moscow and Minsk agreed on 15 major projects aimed at replacing the products that were previously supplied to both countries by Western enterprises.

“It is important for the Union State to make joint efforts to form technological sovereignty, and to develop its technological base,” Vladimir Stroev, rector of the State University of Management, told Izvestia.

Besides, the presidents touched upon the future of the Belarusian port in Bronka. Being in the northern capital, Alexander Lukashenko personally got acquainted with the progress of its construction. Given the fact that the Belarusian side, due to Western sanctions, is deprived of the opportunity to export its goods through the Baltic ports, the emergence of these “gates”, located on the southern coast of the Gulf of Finland, plays a very important role for the republic.

The meeting also discussed the food crisis in the world, for which the West and Russia alternately blame each other. Recall that Vladimir Putin, during the June 24 meeting in the BRICS Plus format, even had to plunge into the realities of French history of the 18th century in order to convey to his foreign colleagues his dissatisfaction with the policies of Western states. “It is with such cynicism now that some Western countries, destabilizing the global production of agricultural products, are approaching issues of this kind, imposing restrictions, for example, on the supply of Russian and Belarusian fertilizers, making it difficult to export Russian grain to world markets,” the president explained. At the same time, German Foreign Minister Annalena Berbock believes that Russia “is using hunger as a weapon.”

However, in the Konstantinovsky Palace, Vladimir Putin reaffirmed that Russia is ready to supply over 50 million tons of grain to world markets. At the same time, he suggested that the Belarusian president join forces to ensure the export of fertilizers to traditional partners, which, apparently, are now considered to be countries that are not on the Russian list of unfriendly ones.