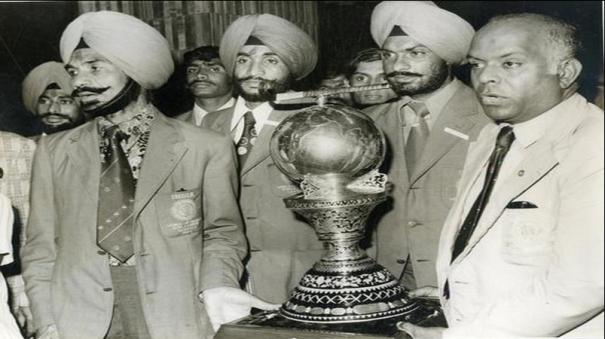 As the Hockey World Cup 2023 series kicks off in Odisha on the 13th, can you forget India’s first national game, the Hockey World Cup, won in 1975? But the current state of the national sport is deplorable. What is more painful is that people have forgotten those World Cup kings led by Ajit Pal Singh who made India proud in 1975.

Even today it is a wonder how the 1975 World Cup win, India’s national sport’s crowning achievement, is forgotten even as the 1983 Cricket World Cup, 2011 Cricket World Cup, Kapil Dev, Dhoni, Sachin and Virat Kohli are remembered. The present generation will have to remember that the Indian team led by Ajitpal Singh beat the toughest Pakistan team in the world by 2-1 in the final in Kuala Lumpur. Because that finals victory was no ordinary feat.

March 15, 1975. A day Indian sports enthusiasts will never forget. On that day, the World Cup hockey final between India and Pakistan was held at the Merdeka Stadium in Kuala Lumpur.

India’s journey in 1975 Hockey World Cup: The hockey teams of those days were strong. The road to the final was not easy for the Indian team. A hard-fought 2-1 win against England. Australia, which was not a big team at that time, drew without beating them. They beat Ghana 7-0. Then we can’t forget the defeat against the relatively weak Argentina team.

It was in the last league game against West Germany that the real strength of the Indian team came out. They beat strong Germany 3-1 to advance to the semi-finals. The Indian team was the top team in terms of goal average in this category.

It was then that India’s savior Aslam Sher Khan found a gap in the Malaysian defense and slotted home a penalty corner in the final moments. Aslam didn’t waste it and scored as the game went into extra time at 2-2. Then India’s Harcharan Singh scored the golden goal and India went into the final with a 3-2 victory celebration.

Final with Pakistan: The final on March 15, 1975 created waves of great anticipation. Indian fans were very interested in hockey then unlike now. The moment everyone was tensely waiting for the radio commentary. Pakistan’s Mohammad Zahid Shaikh scored the first goal to add to the tension of those who were watching the commentary while biting their fingers.

The game heated up and Major Dayanchand’s son Ashok Kumar was brilliant at moments when he was carrying the ball fast. We too were running behind Hindi commentator Jasdev Singh’s voice that goes faster than the ball. In the 44th minute, India’s Surjit Singh converted a penalty corner opportunity to level the score at 1-1. Because Pakistan will definitely retaliate.

But in the 51st minute, Ashok Kumar Singh, son of Indian hockey legend Dayan Chand, took the ball brilliantly and converted a field goal to give India a 2-1 lead, but no one would have expected it to be the goal that lifted the World Cup. This is the only World Cup victory for the 8-time Olympic gold medalist Indian hockey team, and that too is a hard-earned victory over Pakistan!

After India won the World Cup in 1975, Astro Turf was introduced at the 1976 Montreal Olympic Hockey Games to end the dominance of India and Pakistan in the world of hockey. The downfall of the Indian hockey team began then. After that, hockey was neglected due to the administrative failures of Indian hockey and the growth of cricket as a national sport.

When Ashok Kumar, who scored the winning goal in the 1975 World Cup, said this at one point, “Let’s forget the World Cup hockey victory celebrations. But every time on March 15th, those who should remember this, it is a pity that they forget us. He did not even call us on March 15 to congratulate us. It seems that many people do not remember this day. We are a cricket crazy country! Who will remember us, the 1975 World Cup hockey heroes?” I can’t forget to say that painfully.