SportsFormer Al-Ahly star: Mohamed Salah was like a "lizard" in the Swiss...
Sports

Former Al-Ahly star: Mohamed Salah was like a “lizard” in the Swiss Basel.. Video 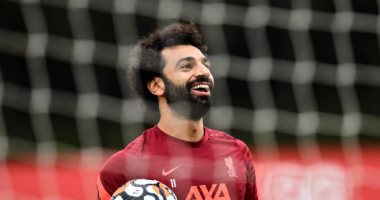 The former Al-Ahly and Zamalek star, Reda Abdel-Aal, refused to compare Mohamed Salah with any player in the history of Egypt, indicating that he is in a completely different position and position, and he is the star of the world currently, and he is the first candidate to win the Golden Ball and is competing with that of the French star Clian Mbappe.

And Reda Abdel-Al said in a television statement on the Egyptian “Primo” program about Mohamed Salah’s intervention in excluding the Egyptian Al-Ahly star Mohamed Qafsha: “There is no player compared to Mohamed Salah, and he does not need to be called the only star because he is already so, and I know that this talk will get angry Some, there are those in Egypt who reject this, Mohamed Salah, after he achieved all these achievements and numbers, is a pride for global and African football in the world and the achievements he achieves.

He added: “Mohamed Salah is the closest to winning the title of best player in the world, especially after the removal of Cristiano Ronaldo and Argentine Lionel Messi, last year, and his current competitor is Frenchman Clian Mbappe. Salah was more deserving of winning when Liverpool won the English Premier League and the Champions League, If he doesn’t win it, the results will be manipulated.”

Reda Abdel-Aal refused to talk about the player’s fees and the renewal of his contract with his English team, and continued: “Why does Salah not get the same as Messi and Ronaldo, and he is in the same position now, this player deprived himself of much, he went out in an interview to confirm that he eats koshary when he comes to Egypt, that is, he deprives himself of koshary, to achieve what he wants and reach the world, now there has been a major transformation in his structure, when he was in the Swiss Basel, he was like a “lizard” now completely changed and became similar to the body of Cristiano Ronaldo.