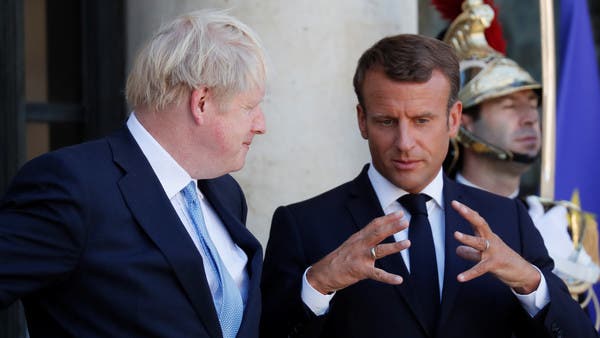 British Prime Minister Boris Johnson expressed “great enthusiasm” for the project proposed by France to create a European political group that would allow Britain to “re-engage” with Europe after Brexit, the French presidency announced, Sunday, after a meeting between Johnson and President Emmanuel Macron.

The Elysee Palace said after a meeting between the two men on the sidelines of the G7 summit in Bavaria, Germany, that the French president felt that Johnson had shown “great enthusiasm” when he spoke about the European political group that would allow Britain to “re-engage” with Europe.

On Sunday, British Prime Minister Boris Johnson warned the French president against “any attempt” to reach a “negotiated solution” now in Ukraine that would prolong the state of “global instability”, according to what the British government announced.

The government spokesman said that the two leaders agreed, during a meeting on the sidelines of the Group of Seven summit in Germany, that the current time is “a sensitive moment in the development of the conflict and that it is possible to reverse the course of the war,” noting that they agreed to “strengthen” Kyiv’s military support.

“The prime minister emphasized that any attempt to settle the conflict now will only reinforce instability and give (Russian President Vladimir) Putin the right to manipulate sovereign states and international markets forever,” he added.

Unlike Emmanuel Macron, Johnson refuses to have a dialogue with Putin, calling him a “dictator”, since the start of the Russian invasion of Ukraine at the end of February.

In an interview with British media, Johnson said Westerners should have “really frank discussions” at the G7 summit and at the NATO summit in Madrid about the implications of war and sanctions, especially with regard to inflation, in order to “protect unity” so far declared. .