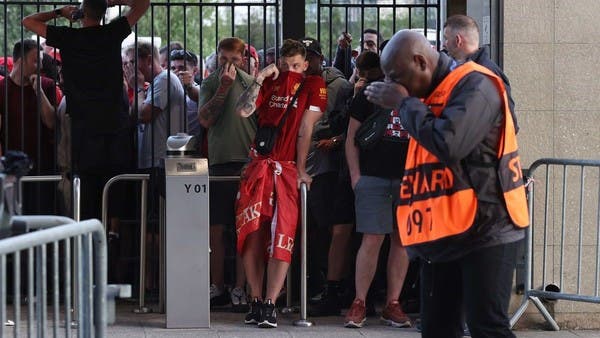 The French authorities gave the opportunity to fans, who were attacked during the Champions League final, to file complaints, as many incidents of assault on fans by gangs of young citizens occurred, while fans returned to the buses carrying them, as metro and railway stations were closed after the loss of Liverpool The English footballer scored a goal against Real Madrid at the Stade de France in Paris.

Lucy, the wife of former Liverpool defender Jason McAteer and their son Harry, was assaulted and robbed while leaving the stadium, in addition to many other similar incidents suffered by the fans after attending the Champions League final.

French authorities have allowed any fan who has been abused to file a complaint online.
A statement issued on the website of the French Embassy in London on Tuesday stated: As of June 6, 2022, foreign nationals who have fallen victim to crimes coinciding with the Champions League final on May 28 and 29 can file a complaint with the French judicial authorities.

The statement added: These temporary arrangements reflect the hopes of the French government to give foreign nationals the opportunity to communicate directly with French judicial authorities regarding crimes of which they are believed to have been victims during the event.

The European Football Association (UEFA) announced several days ago that it would conduct a comprehensive and independent review to find out the problems of entering fans, which resulted in a state of chaos and the use of tear gas canisters outside the Stade de France.