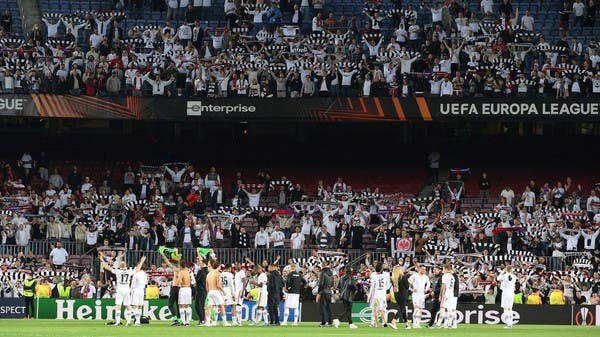 German football club Eintracht Frankfurt announced that it had received “more than 100,000 tickets” requests from its fans for the Europa League final.

This comes despite allocating only 10,000 tickets to Eintracht fans to attend the final match scheduled against Glasgow Rangers in the Spanish city of Seville on May 18.

Axel Hellmann, a member of the Eintracht board of directors, said in a statement published by the club on Monday evening: “We expected a huge demand, but this turnout within 48 hours was huge and exceeded all our expectations.”

Hellmann said that while the club was delighted with this tremendous interest and its intention to make every effort to provide tickets to as many fans as possible, the club knew that many would be disappointed.

On Tuesday, tickets for fans to watch the match on a giant screen at the Eintracht Frankfurt stadium are expected to run out, and Hellmann said he expects tens of thousands of fans to accompany Eintracht to Spain.

And last April, more than 25,000 Eintracht fans attended the team’s match against its Spanish host, Barcelona, ​​in the second leg of the quarter-finals of the European League.

Eintracht Frankfurt is playing its first European final since 1980, which saw it crowned the European Cup (currently the European League) by defeating Borussia Monchengladbach in the final.