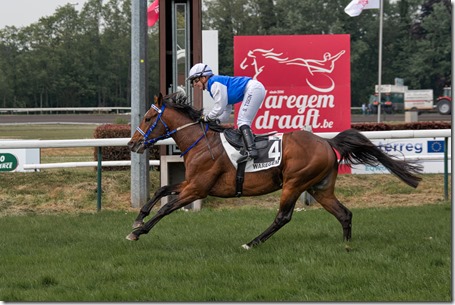 The horse “Freddy Bay”, for GT Zotlev, under the supervision of the same owner and led by jockey Sophie Tyson, was crowned the champion of the Cup race of Her Highness Sheikha Fatima bint Mubarak, “Mother of the Emirates”, which was held yesterday, Sunday, at the Belgian racecourse, Warjem, as part of the activities of the fourteenth edition of the Sheikh’s Racing Festival. Mansour bin Zayed Al Nahyan Global Arabian Horses.

The 2,300-meter race attracted 12 horses aged four years and over, competing for prize money of 10,000 euros. Postma is born, led by William Mongele.

The son of “TM Fred Texas” scored a time of 2:28:10 minutes, while “El Nino” of Ranch du Grand, under the supervision of Jean de Mioli, and led by Olivier Dandegen, came in third place.

The festival is supported and sponsored by the Department of Culture and Tourism, the Abu Dhabi Sports Council, the National Archives, the main partner, Etisalat, the official partner, National Feed, the strategic partner, Emirates Airlines, the official carrier, and also sponsored by Al Masaood-Nissan, Areej Al Amirat, Omair Bin Youssef Travels, Yas Channel, and the General Women’s Union. The Supreme Council for Motherhood and Childhood, the Viola Company, the Abu Dhabi Equestrian Club, and the Emirates Arabian Horse Association.