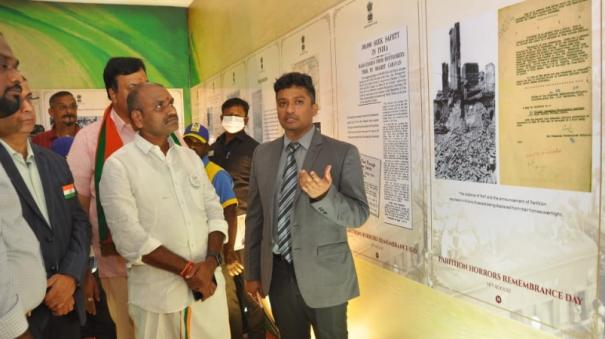 Union Minister of State L. Murugan said that the postage stamp of Ondi Veeran, one of the unknown freedom fighters, will be released on his memorial day on 20th at Tirunelveli district’s Palayangottai.

Minister Murugan hoisted the national flag and distributed national flags to the people in a program organized by the Tamil Nadu Petroleum Dealers Association on the occasion of the 75th Independence Day Amuda Festival. He also inaugurated the corona booster vaccination hall set up there.

Speaking at the program held after that, he accepted the Prime Minister’s invitation and all over the country, especially in Tamil Nadu, hoisted the tricolor flag in their houses, shops and offices, showing pride and support. In Tamil Nadu many people like Veerapandiya Kattabomman, Poolithevan, Kodi Katha Kumaran dedicated themselves for the liberation of the country. People are supporting them by hoisting the tricolor flag from house to house to make them proud. Also we are celebrating VUC 150th birthday, Bharatiyar centenary etc. There were more than 1000 freedom fighters in Tamil Nadu. It has more than 200 unknown players. So that people can know the life history of the freedom fighters who fought against the whites all over the country, a series called ‘Suraj’ will be aired on Doordarshan from tomorrow for 75 episodes continuously. Also, Minister L Murugan said that on the 20th, which is the memorial day of Ondi Veeran, one of the unknown players, his postage stamp will be released in Palayangottai.