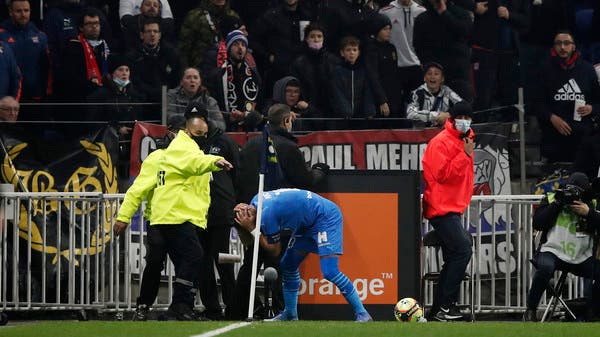 French Interior Minister Gerald Darmanin stressed on Tuesday that the government must urgently enhance the security of football stadiums, following a meeting with French Sports Minister Roxana Maracignano, after the latest incident of public problems in the country recently.

Darmanan said that the French authorities are studying several options, including imposing a ban on fans and stadiums, placing more surveillance cameras around stadiums, and determining who will have the authority to cancel matches in the event of fan violence.

The meeting comes after Olympique Lyonnais’ match against its guests Olympique de Marseille on Sunday was canceled due to rioting by fans.

On Monday, the Disciplinary Committee of the First Division League decided to hold Olympique Lyon matches in the competition behind closed doors until a decision is taken in the ongoing investigations into the events of the match on the eighth of next month.

“We need measures to prevent things like this from happening again so that football remains a popular game,” Darmanan told reporters.

The match was canceled about two hours after referee Rudi Paquet stopped the match in the fifth minute after fans threw a water bottle from the stands and hit the head of Dimitri Payet, a Marseille player.

Referee Paquet decided to return the players to the dressing room after Payet fell to the ground while he was preparing to take a corner kick.

Payet missed training on Monday, and Radio Monte Carlo reported that Marseille was pressing for charges to be brought against those involved.

The stadium’s internal broadcaster had initially said that the match would be completed based on a decision by the local authorities in Lyon, but the French League immediately criticized this step and called in a statement for an emergency meeting of the Disciplinary Committee to decide after which Olympique Lyonnais from playing on its land until the investigations are completed and a decision is taken. A decision on the incident on the eighth of next December.

The French League witnessed many cases of rioting this season, and two points were deducted from Nice, one of which was suspended after the fans clashed with Marseille players during the two teams’ confrontation in August.

In September, the start of the second half of the match between Lance and Lille at the North Summit was postponed for about half an hour after the fans of the two teams clashed before a group of fans stormed the stadium, which led to the intervention of the riot police.