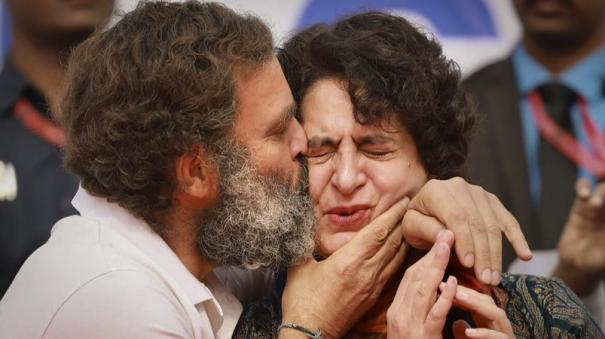 New Delhi: As a result of Rahul Gandhi’s India Unity Yatra, opposition parties are keen to field him as the prime ministerial candidate in the 2024 Lok Sabha elections. Now the question has arisen whether the opposition parties will come forward to support this.

Rahul Gandhi, who served as the national president of the Congress, resigned from his post after the party’s defeat in the 2019 Lok Sabha elections. Thus, Sonia Gandhi remained as the party’s interim president. In one way, Mallikarjuna Kharge was elected as the new president and the issue was put to rest.

In this context, Rahul is currently trying to be nominated as the prime ministerial candidate. This is based on the ‘Unity Yatra’ that Rahul started on September 7. Thus, about 2,800 km. He has traveled the distance as a pilgrim. His Padayatra, which has resumed after a short break, is scheduled to end in Jammu and Kashmir on January 26.

Meanwhile, he did not focus on the Himachal Pradesh and Gujarat assembly elections. Congress rule in Himachal despite Rahul’s complete boycott. There is an opinion that if he had campaigned hard in Gujarat, he would have won there too. Ignoring any of this, Rahul’s entire focus is on the 2024 Lok Sabha elections. Like the BJP, Rahul is of the opinion that he cannot form a government in the states without winning the Lok Sabha elections. Rahul’s Yatra was well received in South Indian states.

The Congress, which is the strongest opposition party in Kerala, is eyeing a chance to rule there in the next election. In Karnataka, the coalition government with the secular Janata Dal could not stand up to the BJP’s political machinations. Congress could not form government in Andhra Pradesh and Telangana due to the strength of regional parties. However, Congress is happy that the BJP has not yet grown in these two states. Similar situation continues for Congress in Odisha too.

On the basis of Congress influence, Rahul’s pilgrimage continued for 3 days in Tamil Nadu, 18 days in the small state of Kerala, 21 days in Karnataka and 12 days in Telangana.

In Maharashtra, the Congress formed an alliance with the Nationalist Congress and the Shiv Sena. But here too like in Karnataka, BJP had to lose power. However, Rahul went on a 14-day pilgrimage to Maharashtra to face the BJP in the coming elections with the same alliance. Similarly, in MP, which lost power, the Congress has hope to form the government again. Congress is trying to stay in power even after the next elections in Rajasthan.

So, Rahul Gandhi spent 18 days in MP and 16 days in Rajasthan. The yatra lasted for 11 days as the Congress was trying to win the upcoming elections in Haryana as well. Rahul will travel across UP, Punjab and Jammu and Kashmir from January 3 to 26.

Rahul did not undertake the Yatra in Gujarat, Bihar, Jharkhand, West Bengal and North Eastern states. However, in many of these states, the Congress has the support of its allies. With these, Rahul is expected to try to unite the opposition parties after his unity pilgrimage. In this, it is also seen that he is planning to present himself as the prime ministerial candidate on behalf of the opposition parties. Because Prime Minister Narendra Modi’s growth has made it difficult for the BJP to win without fielding a candidate to directly oppose him.

Realizing this, most of the opposition leaders are ready to accept Rahul as the prime ministerial candidate. In this, the ruling DMK of Tamil Nadu is at the top. Bihar’s parties have since extended their support to Rahul. Congress is in Lalu’s mega alliance here. Chief Minister Nitish Kumar, who recently rejoined the alliance, has also extended his support to Rahul. In Maharashtra, the Shiv Sena party has given green light through its spokesperson Sanjay Raut.

To face them, Rahul’s only weapon can be the fruits of his unity pilgrimage. Even if the 2024 Lok Sabha polls fail, the Congress has a chance to emerge as a rival party to the BJP.