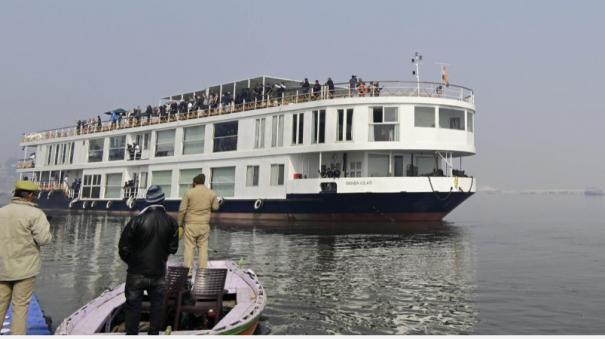 Lucknow: Union Minister Giriraj Singh has hit back at Akhilesh Yadav’s allegation on Ganga Vilas that people like you are praying day and night to God that something bad should happen to good things.

Last week, Prime Minister Modi inaugurated the world’s longest waterway cruise ship, MV Ganga Vilas, through a video call from Varanasi, Uttar Pradesh. Commenting on the cruise, Samajwadi Party leader Akhilesh Yadav had attacked the BJP government for running a bar named Ganga Vilas on the holy river Ganga. Also, on Monday, he shared a video message about Ganga Vilas, asking, “Do you know the difference between a boat and a luxury ship, and now Vayu Vilas will be sent to rescue the stranded passengers?”

Meanwhile, reports that the Ganga Vilas luxury cruise ship reached Patna as scheduled and that the cruise ship got stuck at Chapra are untrue. The Waterways Authority of India (IWAI) has informed that the Ganga Vilas will begin its journey as planned. Chatendra Singh, CO of Chapra, said, “Local reporters peppered me with questions. I told them that the state disaster rescue team’s boats were stationed at the spot as a precautionary measure. Otherwise, there was no other problem.”

Raj Singh, chairman of Heritage Rivers Journeys, which operates the Ganga Vilas luxury boat, told Newsweek, “The river is not deep at that place. You can use the rafts to go to the shore, explore the places and return to the boat. The luxury boat was told to stop in the deep part of the river. This is the usual practice.” .

In this situation, Union Minister Giriraj Singh has responded to Akhilesh Yadav’s accusation by quoting the message of Local Waterways Authority of India. He said on his Twitter page, “People like you are praying day and night to God that something bad should happen to a good thing. For your best attention Ganga Vilas luxury ship has reached Patna on time. I can tell you that it will reach its next destination Begusarai on time too.”

Ganga Vilas: It was decided to run a luxury cruise from Varanasi in Uttar Pradesh via Bangladesh to Dibrugarh in Assam. A luxury ship named ‘MV Ganga Vilas’ was built in Kolkata for this purpose. This ship is operated by a private company called ‘Heritage Rivers Journeys’. This is the longest river cruise in the world.

This ship takes 52 days to travel from Varanasi to Dibrugarh. The ship covers a distance of more than 3,200 km. 5 states like UP, Bihar, Jharkhand, Assam, West Bengal and the neighboring country Bangladesh come along its way. Tourists traveling on this ship can visit 50 tourist destinations including world heritage monuments, national parks, steps, Patna in Bihar, Sakibganj in Jharkhand, Kolkata in West Bengal, Dhaka, the capital of Bangladesh, and Guwahati in Assam.