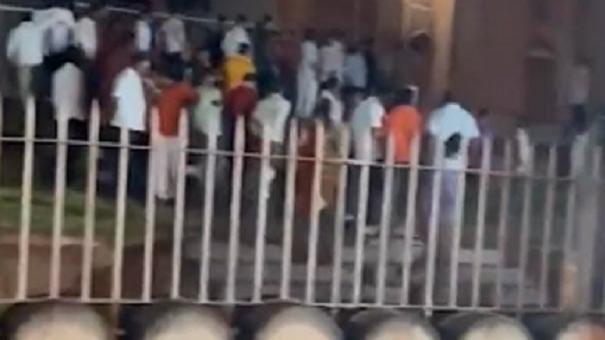 Then some of the pilgrims entered the traditional madrasa on the way. They performed puja in one part of the building. There they raised slogans like Jai Shri Ram, Long live Hindu Dharma. The police registered a case in this regard. A case has been registered against 9 people. 4 people have been arrested. Four people have been arrested while Muslim organizations have warned that they will stage a protest if the people involved are not arrested by Friday.

Built in 1460, the Mahmud Gavan Madrasa is known as a heritage center according to the Archaeological Survey of India report. This madrasa is also included in the list of buildings of national importance.
Regarding the incident, the police said that the gang broke the lock of the madrasa and went inside. Standing on the steps of the madrasa, they raised slogans of Jai Shri Ram and Long Live Hindu Dharma. Later it is reported that they performed pujas on one side of the building.

Bidar district Muslim organizations have warned that if all those involved are not arrested by today, there will be a huge protest.