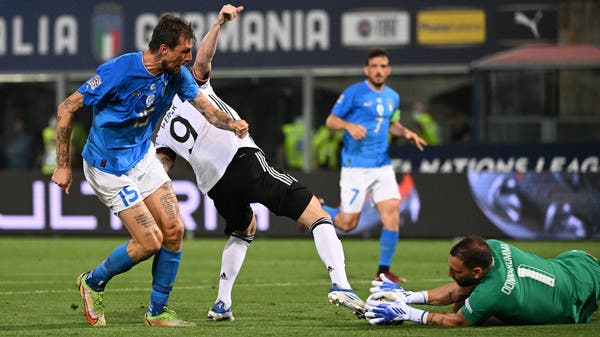 Germany and England are still looking for a first win in the current edition of the European Football Championship, and the first will try to achieve that at home against their rivals Italy and the second against stubborn Hungary on Tuesday in the fourth round of Group C for the first level.

Germany has settled with three draws with the same result (1-1) so far, the first of which was against Italy in Bologna, before England snatched a fatal draw with a late goal by Harry Kane in the second round and be lucky against Hungary, which was able to win the last match.

Italy, the European champion, leads the “Death” group with 5 points, one point ahead of Hungary, two of Germany and three of England.

While Hungary seemed the least likely candidate to compete for the top spot in the group due to the quality of the opponents, it confirmed that its results in the European Cup last summer were not achieved by chance, despite its exit from the first round, after it imposed a draw on both Germany and France, the world champions.

The match will be at the “Borussia Park” stadium in Monchengladbach, the number 37 between the two arch-rivals, and the balance is tilted in favor of Italy with 15 wins against 9 for Germany, while the score was tied 12 times. The Azzurri are looking for their first victory over Die Mannschaft since the 2012 European Cup semi-finals.

“In terms of the team’s image, I don’t think the four draws are good – the players and I want to win,” coach Hansi Flick said, commenting on his team’s draw in its last four matches (plus another against the Netherlands last March).

“We want to win matches when necessary. We have six new players and we are developing.”

Flick revealed that defender Antonio Rudiger and winger Serge Gnabry are expected to return to the team after their absence from the last match, to rest the first and injure the second calf.

After failing to qualify for the 2022 World Cup in Qatar at the end of this year to miss the World Finals for the second time in a row, Italy hopes to compensate somewhat in the newly developed continental championship that started just four years ago to replace the friendly matches.

After four matches in the current window within two weeks, which concludes on Tuesday, the teams return in September to complete the last two rounds of the group stage, with the finals (semi-finals, third and final) to be held in June 2023.

It is noteworthy that the teams that top the four groups in the first level qualify for the finals to be held in the territory of one of those teams.

England enter the match at the Molino Stadium in Wolverhampton, looking for revenge, after losing the opening game in Budapest 0-1, when Hungary achieved its first victory over the “Three Lions” since 1962.

After a draw in Germany in the second match, England was unable to achieve its revenge against Italy, which deprived it last summer of its first European Cup title when it beat it on penalties at Wembley Stadium in London, after it was tied to a goalless draw on Saturday in the third round. In its last 25 matches, England lost only one match, which was against Hungary (a defeat on penalties is a draw).

And after playing at the Molino Stadium in a draw against Italy in front of only three thousand spectators of boys under the age of 14 due to the rioting in the European Cup final at Wembley Stadium, the fans will return to support England, perhaps helping them to collect the three points for the first time .

In Group D, the Netherlands seeks to cling to the lead when they receive Wales at the “De Queep” stadium in Rotterdam.

“The Mills” almost kept the full mark so far if Memphis Depay had not missed a penalty kick in overtime in the last match against its guest Poland (2-2), after two opening wins in Belgium (4-1) and Wales (2-1). .

The orange team, returning to the world finals after missing the World Cup in Russia 2018, leads the group with 7 points, in front of Belgium (4), Poland (4) and Wales, which has one point.

The Netherlands achieved a series of 10 official matches during which it did not taste a loss, as it won 7 to 3 draws, while its last loss dates back to June 27, 2021 in the European Cup final price against the Czech Republic 0-2.

The Netherlands reached the final of the first edition of the Nations League, losing to Portugal.

For its part, Poland enters its home match against Belgium, looking for revenge after its resounding 6-1 fall in Brussels in the second round. Belgium was on its way to collecting the three points in its last match against Wales, before a fatal goal in the 86th minute.