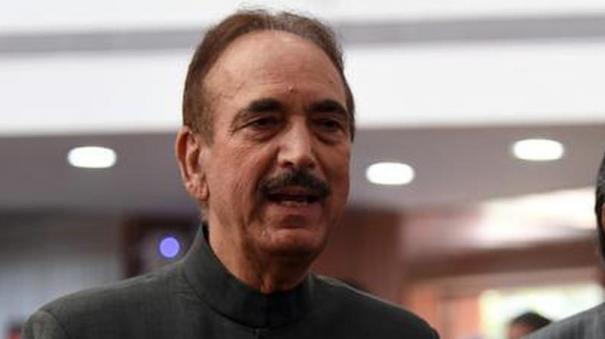 New Delhi: Senior Congress leader Ghulam Nabi Azad (73) has announced that he will step down from all posts, including as a core member of the party. In this regard, in the letter he sent to Congress President Sonia Gandhi, Rahul Gandhi accused him of acting childishly and without maturity.

The Congress suffered a major setback in the 2019 Lok Sabha elections. Taking responsibility for this, Rahul Gandhi resigned from the post of party president. After that, Sonia Gandhi took over as party leader. However, Rahul Gandhi himself is said to be acting as the shadow leader.

Senior Madhya Pradesh Congress leader Jyotir Aditya Scindia joined the BJP in 2020 and is currently serving as a Union minister.

Senior Congress leader Ghulam Nabi Azad has also joined this list. He announced yesterday that he would step down from all positions, including as a member of Congress.

In this regard, Rahul Gandhi has severely criticized Rahul Gandhi in his 5-page resignation letter sent to Congress president Sonia Gandhi. At the same time, Sonia has praised Gandhi.

“Rahul Gandhi is acting childish without maturity. He brought the government into disrepute by tearing up the ordinance issued during the previous Congress regime. Asad mentioned in the letter that the United Progressive Alliance failed in the 2014 Lok Sabha elections because of this.

Azad, who has held various important positions such as the Chief Minister of Kashmir, the Union Health Minister and the Congress Rajya Sabha Committee Chairman, is considered to be a big setback for the party because of his departure from the Congress. There are reports that Azad will start a new party soon.