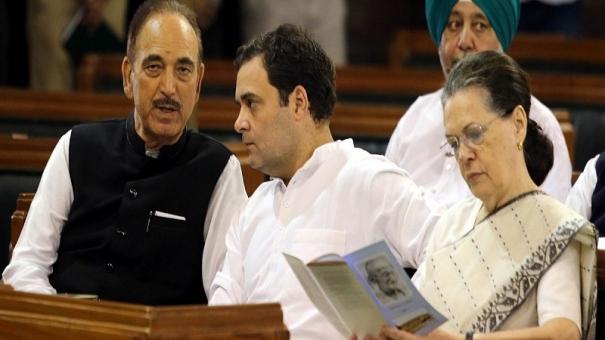 Ghulam Nabi Azad, who was the symbolic face of the senior leaders of the Congress party, has resigned from all posts including the rank of basic member of the party.

In this regard, he has written a 5-page letter to Congress Interim President Sonia Gandhi. The details of the letter have been published on the internet. In it, Rahul Gandhi has completely destroyed the consultative system in the Congress party. Rahul Gandhi’s childish activities are the reason for the election defeat in 2014. Ghulam Nabi Azad also said that Sonia Gandhi is the leader only in name.

‘Rahul is irresponsible’ Rahul Gandhi is an irresponsible person. He left the Congress to the BJP at the national level and the state parties at the regional level. This has happened because of Rahulil’s leadership in the last 8 years. Not only that, Rahul Gandhi insulted all the senior leaders of the party. Rahul Gandhi resigned from the post of President after the 2019 parliamentary election defeat. But since then the situation has only worsened.

Senior executives of the party who have dedicated their entire lives to the party are regularly insulted. Ghulam Nabi Azad mentioned that just as the United Progressive Alliance was destroyed due to remote control mode, the Congress is also destroyed.

Sonia Gandhi is the Interim President of the Congress Party only in name. Otherwise all decisions are taken by Rahul Gandhi and not by his secretaries or his bodyguards.

I have been heavily criticized after announcing my resignation as the president of the Jammu and Kashmir Congress Campaign Committee. Ghulam Nabi Azad has said that the people behind this are the supporters of Rahul Gandhi who made a puppet like me and conducted the funeral.

Subsequent resignations: Senior leader Anand Sharma has written to Congress President Sonia Gandhi to resign from the post of Himachal Congress Steering Committee President. In that, I was not consulted about the decisions taken by the party ahead of the election. I cannot give up my self-respect. But Anand Sharma had said that he will continue the election campaign in Himachal.

Experts predict that the resignation of leaders like Kapil Sibal and Ghulam Nabi Azad from the Congress party may affect the upcoming Himachal Assembly elections, not only the Jammu and Kashmir Union Territory elections but also the 2024 parliamentary elections.