Giants Brigades: 3 leaders of the Houthi militia were killed in the Harib front in Marib 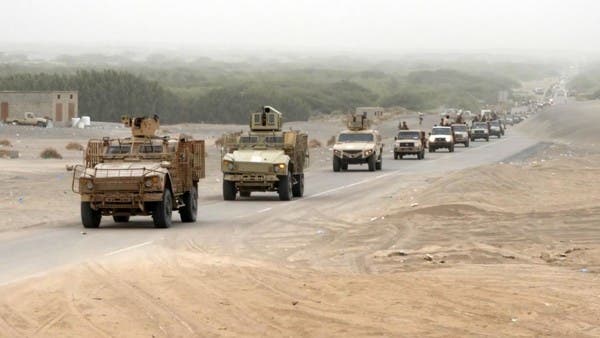 Al-Arabiya correspondent reported that the Giants Brigades targeted the Houthi militia sites north of Harib, in light of the continuing clashes south of Marib, which resulted in the killing of 3 leaders of the Houthi militia on that burning front.

The brigades advanced towards the center of the city and reached the Al-Dharaan and Ikrima mountains, where hundreds of Houthi fighters who fled Shabwa are holed up.

For its part, the forces of the Yemeni army and the resistance were able to expel the militias from the ruling positions and large areas towards Aqabat Mala’a, south of Marib.

On Thursday, the Yemeni army forces, backed by the popular resistance and the coalition aviation, achieved new progress on the southern front in Marib, during battles that inflicted heavy losses on the Iranian Houthi militia in equipment and lives.

The media center of the Yemeni army stated that the army and the resistance launched a sweeping attack, during which they managed to defeat the Iranian militia from ruling positions and large areas towards Aqabat Mala’a, south of Ma’rib.

He confirmed that many militia members were killed or wounded, in addition to other losses in combat equipment, as a result of army fire and coalition air raids.

He pointed out that the battles are still continuing, amid the collapse and great human and material losses in the ranks of the Iranian militia.

The center published a video clip of the collapse of the fortifications of the coup militia in front of the advances of the army and the resistance south of Marib.

In this context, the Coalition to Support Legitimacy in Yemen announced, Thursday evening, that the forces of the “Happy Yemen” brigades made “qualitative advances” on the southern fronts of Ma’rib, and joined forces with the Giants Brigades on the same front.

The coalition praised the heroism of the giants brigades and the UAE’s support for the “happy freedom of Yemen,” according to a brief statement.

The army forces and the Giants Brigades continue to advance on the southern fronts of the Ma’rib governorate, and have taken control of new sites in Aqabat Ma’la in the Harib district, and that 3 kilometers separate them from the strategic Umm Rish camp, according to field sources.

The sources confirmed that the government forces were able to isolate the Houthi militia stationed in the Al-Balaq mountain range and the surrounding areas, after advancing at the Lajmah site.