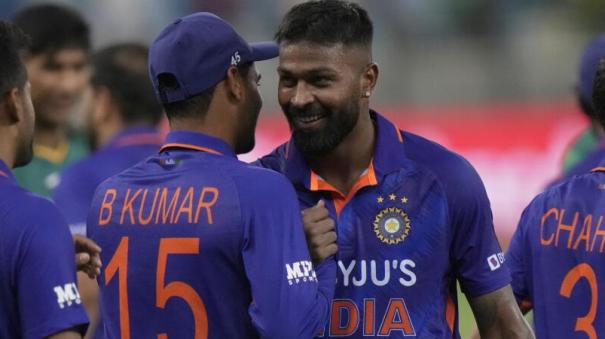 Dubai: The Indian team defeated the Pakistan team by 5 wickets in the Asia Cup cricket series held in Dubai yesterday. Chasing a target of 148 runs, the Indian team won in 19.4 overs with 2 balls to spare. Ravindra Jadeja scored 35 runs off 29 balls with 2 sixes and 2 fours and Hardik Pandya scored 33 runs off 17 balls with 1 six and 4 fours and contributed to the team’s victory. The pair added 52 runs for the 4th wicket.

In the last over bowled by Mohammad Nawaz, only 7 runs were needed for victory, Jadeja struck on the first ball. Hardik Pandya clinched the victory with a six over long-on when 6 runs were needed from 3 balls at one stage. Earlier, Hardik Pandya had shown great ability in bowling as well. After bowling 4 overs, he conceded 25 runs and took 3 wickets.

In the same ground 4 years ago in the match against Pakistan, Hardik Pandya suffered a back injury and was taken on a stretcher as he could not even move on the field. This injury put his cricket career in question. Hardik Pandya was away from international cricket for about 3 years due to this injury. He has now recovered from injury and led the Indian team to victory against Pakistan at the same ground.

After the match, Hardik Pandya said: “I am happy to get this win because it is very important for us. We were challenged as a team. Liked the way Jadeja played. I have not forgotten the 2018 Asia Cup match incident. They were carried on stretchers to this ground. Same series, same opponent, same restroom. I am thinking about the events that happened that day. Even after all this, there is a chance to play again. I feel accomplished now.

Because what I did to recover and how I got the chance was a beautiful journey. Former Indian fitness specialist Nitin Patel and current strength and conditioning coach Soham Desai played a key role in my return to full fitness. Appreciate them.

When chasing a target like this, you always have to plan the game on an over-by-over basis. I knew Pakistan had a young bowler (Naseem Shah or Shahnawaz Dahani) and a left-arm spinner (Mohammad Nawaz) to bowl in the latter stages. Only 7 runs were needed in the last over to win. But I would have scored even if 15 runs were needed. I know the bowler is under more pressure than me in the last over.

Seven runs doesn’t sound like much to me. No matter what the situation, hitting the ball is all you need. Situation in terms of bowling
It’s important to evaluate and use our strengths. My strength is bowling short and hard lengths. You have to make good use of the batsmen and force them to make mistakes. Our process is not just for this tournament but for the World Cup. If such a situation comes again, surely we will remember this match and take inspiration from it. This is what he said.

Pakistan in search of reaction

Pakistan took too long to bowl against India. To bowl the last over within the specified time as per ICC rules
Should have started. Pakistan failed to do this and as punishment they were allowed to field only 4 instead of 5 fielders near the boundary in the last 3 overs. Jadeja and Hardik Pandya took advantage of this. It is noteworthy that this rule of ICC was introduced in international cricket last January.