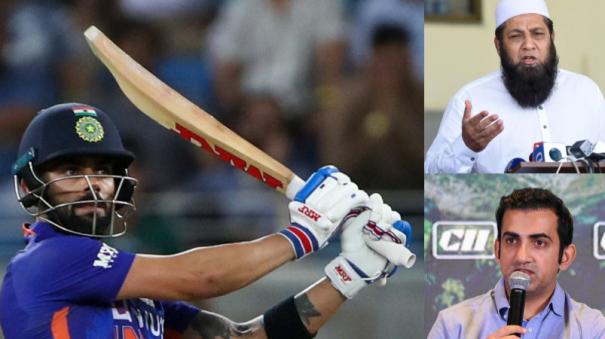 Dubai: Former Indian cricket team captain Virat Kohli is slowly regaining his lost form. He has scored more than 30 runs in subsequent T20 matches. In this case, let’s see what former cricketers Gautam Gambhir and Inzamam-ul-Haq said about it.

Virat Kohli is known as the run machine of the international cricket field. His run chase continued in all three formats. However, his performance has faded in the last few years. The question arose as to when he would score a century. Recently there have been positive and negative comments about his performance. It is in this context that he has added 35 and 59* runs in successive matches in the ongoing Asia Cup series. It is noteworthy that he played the first match against Pakistan.

What did Inzamam say? – “The way he played in these two matches impressed me a lot. He is determined to give back. His recovery from his tough phase is a good time for the Indian team. Cricket fans around the world want him to add runs and continue his form. All the dominant players in international cricket have gone through it. A series or a month is enough for them to get back to form,” said former Pakistan captain Inzamam.

What did Gambhir say? – “I hope Kohli’s confidence will be boosted by the good start he got in the Asia Cup. No matter what you do in net practice, the confidence you get from adding runs on the field is of a different kind. Who is the opponent here? The runs he has scored and the time he has spent on the field are important. We can see his quality performance in the coming days,” said Gambhir.