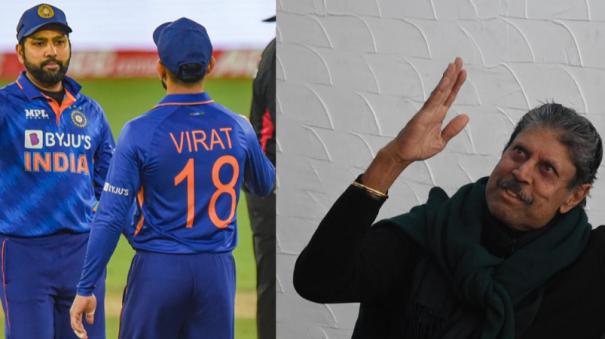 Mumbai: The 2023 ICC 50 Over World Cup is being held in India. Kapil Dev has issued a stern warning to those who are eagerly waiting for a repeat of 2011 and India will win the 3rd World Cup under the leadership of Rohit Sharma after Dhoni.

Kapil Dev won the World Cup from nothing. It is no exaggeration that he is the founder of the cricket that is so popular in India today. A man who changed the meaning of cricket in the eyes of Indian players.

Kapil Dev has always been honest in his criticism of the BCCI, unconcerned about the influence of its power-business syndicate network. At a time when all the big heads are heaping criticism on the BCCI’s concessions, his continued sharp criticism and consideration of his views will save Indian cricket from the current commercial welfare of the market.

Kapil Dev gave a candid answer to the question whether India will win the 2023 World Cup in an interview for a private news channel. If India wants to win the World Cup, it is useless to rely on Rohit Sharma, Virat Kohli or 2-3 players, individual players. That means 5 or 6 match winners should be made in the team to win the world cup. He says it should have been created by now.

“Want to win the World Cup? The coach, selectors and team management have some tough decisions to make. Personal interests should be set aside. They have to think about the team. If you think Virat Kohli, Rohit Sharma and 2-3 players will win the World Cup, it will never happen.

You have to believe in your team. Do we have such a team? You have to ask yourself that. Do we have specific match winners for that? Yes definitely! They have to ask themselves that we have players who can win the World Cup and pick a team with confidence.

There are always one or two players who have established themselves as pillars of the team. Everything is woven and chosen around them, it should not be like this. But, we need to break this trend and produce at least 5-6 match winners.

That’s why I say, we can’t rely on Virat and Rohit. We need players who fulfill each of their responsibilities. The youth should come forward and say ‘this is our time’,” said Kapil Dev.

As we said that day, Kapil Dev is saying that ‘the old is gone and the new is coming’. But with the IPL lobby, IPL-related, commercial forces in the BCCI sponsor system and the team’s superstars as the sponsor images of those sponsors, Kapil Dev can confidently say that the change won’t come until 2025.

Virat Kohli’s MRF Tires sponsorship till 2025 There are many more in the same way… It is questionable whether the change will progress! It is because of these trade welfare praises, influences, and IPL trade influences that various fake justifications are being taught for so many matches in the team selection.

Mohanlal: Pathan story line in Mohanlal’s upcoming movie.. How else?

Union Budget: Nirmalamma introduced Paddu amid many expectations and challenges