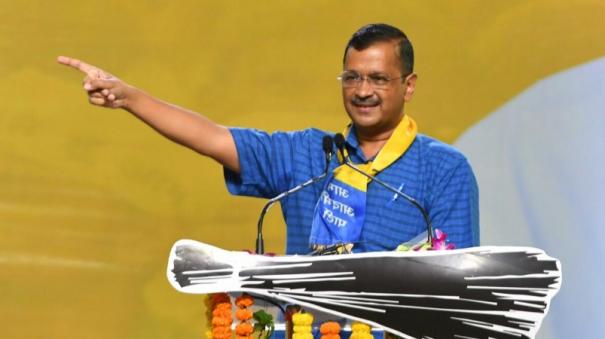 New Delhi: Arvind Kejriwal said that God has created the Aam Aadmi Party to protect the political system and the country from corruption, inflation, unemployment, etc., just like Krishna was sent to eradicate evil.

The first national meeting of elected representatives of the Aam Aadmi Party was held at the Indira Gandhi Stadium in Delhi. About 1,500 elected representatives from 20 different states participated in the meeting, held in the run-up to elections in Gujarat and Himachal Pradesh. Party coordinator Arvind Kejriwal addressed the gathering.

Speaking then, he said, “When I started the Aam Aadmi Party ten years ago, I did not think that this Indira Gandhi Maidan would be full of elected members. Just like Krishna was sent to destroy the evils, from corruption, inflation, unemployment, etc., God saved the Aam Aadmi Party from the evils of the Constitution and the country. has created

For 60 years since the adoption of the Constitution of India on November 25, 1949, the Congress and the BJP have been corrupting the country. So, God intervened and formed the Aam Aadmi Party in 2012 to save the country and the constitution. This is no coincidence. God has given us the responsibility. Keep that in mind and strive for development.

75 years ago, everyone came together to drive white people out of the country. Now we all have to come together to put India first. Aam Aadmi Party is sowing seeds all over the country. Soon it will grow into a tree as big as Delhi Punjab.

BJP has launched the second phase of its Operation Tamarai. Many of our MLAs have again negotiated to give Rs.25 crores. If they do not join the BJP, they are threatening to be arrested like Amanatullah Khan. AAP MLAs are also freedom fighters. They are facing raids by CBI enforcement agencies, ignoring their opponents’ Rs 25 crore bargain. They buy MLAs. Then they stand at Red Fort and say they are fighting against corruption,” he said.