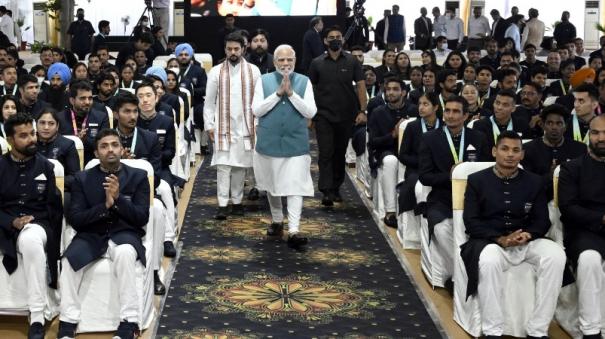 India won a total of 61 medals including 22 gold, 16 silver and 23 bronze in the 22nd Commonwealth Games held in Birmingham, UK recently.

In particular, the Indian sportsmen and women have played tremendously in weightlifting, boxing, wrestling, badminton and table tennis and collected medals. Women also won medals in T20 cricket, lawn bowls and athletics. In this case, the Indian team that participated in the Commonwealth Games met Prime Minister Modi yesterday. Prime Minister Modi honored them with a banquet.

Then Prime Minister Modi said: When all of you participated in the Birmingham tournament, crores of people in India were awake even in the middle of the night, watching your every action. As we promised when we sent the Indian team on their way, today we are celebrating the victory.

We have missed out on medal opportunities in many competitions. Medal count does not fully reflect performance. In 4 new games compared to the previous tournament, India found a new way to win.

From lawn bowls to athletics, our players have played brilliantly and racked up victories. With this activity, the environment for engaging in such new sports will increase tremendously in India. The golden age of Indian sports has begun.

Debutants in boxing, judo and wrestling won 31 medals, reflecting the growing confidence among the youth.

Talented newcomers should be identified and developed enough to win medals. The Central Sports Department should carry out the work for this.

We have a responsibility to create the best, most inclusive, diverse and dynamic sports environment in the world. No one with talent should be left out.

The players should be prepared to perform well in the upcoming Asian Games and Olympics. Thus he spoke.

Later, the Indian players and players took a photo with Prime Minister Modi. Union Sports Minister Anurag Thakur and others participated in the event.