Good news from WhatsApp.. these features are now available 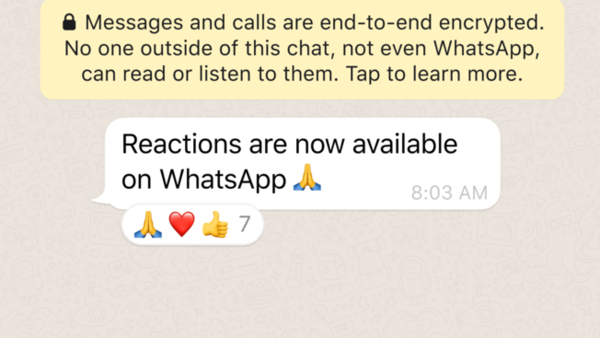 WhatsApp announced the availability of the feature to interact with messages with emojis, in addition to increasing the size of files that can be shared with others.

On its official blog, WhatsApp said, “We are happy to share that emoji interaction is now available on the latest version of the app.” The company promised to continue “improving the feature by adding a wider range of emojis in the future.”

WhatsApp explained that users are now able to share files of up to 2 gigabytes, a huge jump from the previous limit of 100 megabytes.

The company also announced that it will soon double the maximum size of users in group chats from 256 to 512 users in a single chat group.

And WhatsApp announced last month that it was testing a new feature called “communities” that aims to organize groups into larger structures so that they can be used in workplaces and schools.

WhatsApp chief Will Cathcart said the feature will bring groups, which have a maximum of 256 users, under larger umbrellas where those responsible for managing them can send notifications to a gathering of thousands.

“It’s intended for the communities you’re already a part of in your life and makes a special connection,” Cathcart added in an interview with Reuters, referring to other similar types of communication frameworks such as Slack or Microsoft Teams.

He said there were no current plans to charge for the new feature, which is being trialled with a small number of global communities, but he did not rule out providing “special features for enterprises” in the future.

The messaging service, which is encrypted between the sender and receiver and has about two billion users, said that the communities feature will also be encrypted on both sides.

Meta CEO Mark Zuckerberg said in a blog post last month that (communities) will be up and running over the coming months. He added that Meta will create community messaging features for Facebook, Messenger and Instagram.