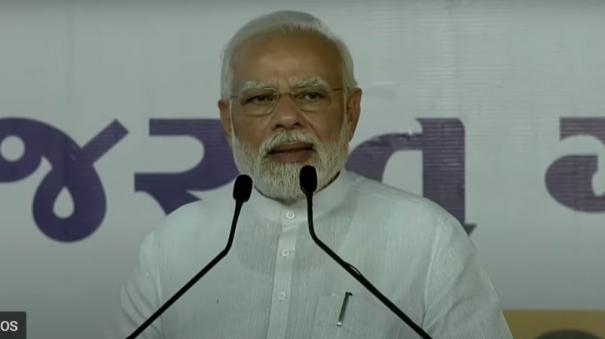 Gandhinagar: Prime Minister Modi said that we are sure that the younger generation should not face the same problems as the previous generation.

Prime Minister Narendra Modi today (Friday) participated in the ‘Gujarat Pride Movement’ event held at Goodwell, a tribal area in Navrasi, Gujarat. He then started 7 new projects, laid the foundation for 12 projects and started Bhoomi Puja for 14 projects. The event was attended by Gujarat Chief Minister Bhupendra Rajinikanth Patel, Union and state ministers, people’s representatives and many others.

Addressing the gathering at the function, the Prime Minister said, “Indigenous people are flocking here in large numbers. Organizing such events with pride is a sign of the continued love of the indigenous brothers and sisters. Gujarat is proud of the new impetus given by growth.

The twin-engine state is confidently carrying on the glorious tradition of rapid, inclusive growth in Gujarat. Today’s projects will make life easier in Surat, Navrasi, Valsad and Tabi districts of South Gujarat.

Over the past 8 years the government has been successful in connecting many new areas of the population and implementing development practices and options. The poor, the oppressed, the Dalits, the tribals, the women and the weaker sections of the population have spent their entire lives on mere basic needs.

Previous governments did not take development as their priority. The divisions and areas that needed the most help were without facilities. In the last 8 years, following the mantra of “Let us all unite, let us all rise”, this government has placed great emphasis on the welfare of the poor and the provision of basic amenities to the poor. The government is implementing a program that empowers the poor 100 percent by regularizing welfare programs. ”

The Prime Minister then spoke in Gujarati, “Your love and blessings are my strength”. Children of tribal communities should be given all possible opportunities. Today’s projects worth over Rs 3 trillion are very contradictory compared to the headlines given in the past for opening a small water tank. Continuous welfare and development programs have long been their administrative system.

We see being part of the government as an opportunity for service. We are committed to ensuring that our new generation does not face the same problems as the older generation. So these programs are about ensuring basic amenities like clean drinking water and quality education for all. There was a time when there was not even a science school in this area. Now medical colleges and universities are coming. Life is being transformed through infrastructure, education, trade, and transportation programs to remote areas.

Mother tongue education in technical subjects like medicine and engineering will also provide opportunities for OBC and tribal children. I commend the State Government for the implementation of the new phase of the Forest Brothers Project. Overall, we are striving for inclusive and equitable development, ”he said.