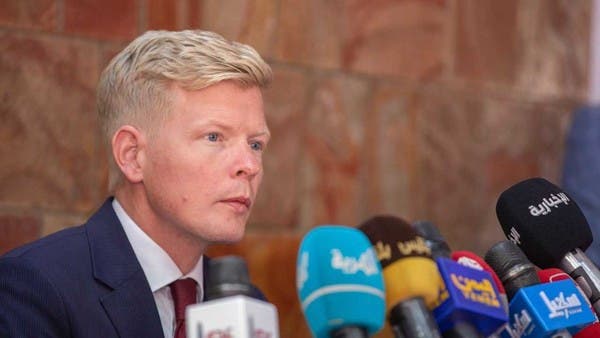 On Wednesday evening, the UN Special Envoy for Yemen, Hans Grundberg, renewed his call to the Yemeni parties to move forward with implementing all elements of the armistice to alleviate human suffering.

He stressed that he will continue to provide support to benefit from the armistice in moving towards a political solution.

According to the statement, Grundberg discussed the status of the truce and the tangible benefits it has provided so far to Yemeni civilians, especially the tangible reduction in the number of civilian casualties.

Discussions also focused on ways to overcome challenges, especially in opening roads in Taiz and other governorates and resuming commercial flights from Sana’a Airport.

The UN envoy said, “The parties should move forward with the implementation of all elements of the armistice in parallel to reduce the impact of the war on civilians and facilitate the freedom of movement and movement of people and goods.”

Grundberg urged constructive action and adherence to all elements of the truce to alleviate human suffering.

He added, “I will continue to provide my active support to the Yemeni parties to identify solutions, raise the level of confidence and take advantage of the truce in moving towards a comprehensive and sustainable political solution that meets the legitimate aspirations of Yemeni women and men.”

On April 1, the United Nations sponsored a truce agreement between the government and the Houthi militia; But the latter has breached all its commitments towards the armistice, including lifting its siege imposed on Taiz governorate, obstructing the operation of Sanaa Airport, and heading towards a large-scale escalation in more than one Yemeni governorate, according to government accusations.