Grundberg: Opening Taiz crossings is a priority to move towards other files 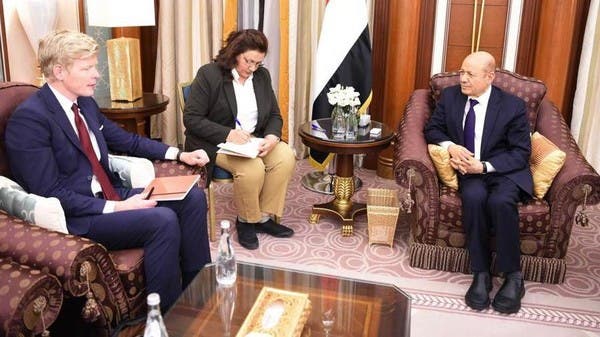 The Special Envoy of the Secretary-General of the United Nations to Yemen, Hans Grundberg, said that opening the Taiz crossings remains an urgent priority for his efforts that seek to push the consultations forward and move towards other files.

This came during his meeting, Monday, in the Saudi capital, Riyadh, with Yemeni President Rashad Al-Alimi, who stressed the importance of exerting more pressure on the Iranian-backed Houthi militia to fulfill its commitments under the armistice agreement, and not to move to any other files before obligating them to open the main Taiz roads. Which would make a difference in alleviating the suffering of the city’s residents who have been besieged for more than seven years, as he put it.

According to the official Yemeni news agency, President Al-Alimi listened to a briefing from the UN envoy on the results of the UN consultations aimed at implementing and consolidating the armistice agreement, and opportunities to build on it to bring peace and stability to Yemen.

The Yemeni president warned against the continued international inaction over what he called “the systematic Houthi blackmail, to gain more time, prolong the war and continue suffering.”

He also warned against mobilization and organized mobilization by the Houthi militia, which threatens any opportunity to renew the UN armistice in which the Leadership Council and the government fulfilled all obligations.

The UN envoy expressed his appreciation for the positive response to his efforts by the Presidential Leadership Council and the government, in order to alleviate the suffering of the Yemeni people throughout the country.