Grundberg: The Houthi attack on Ma’rib undermines the settlement of the conflict in Yemen 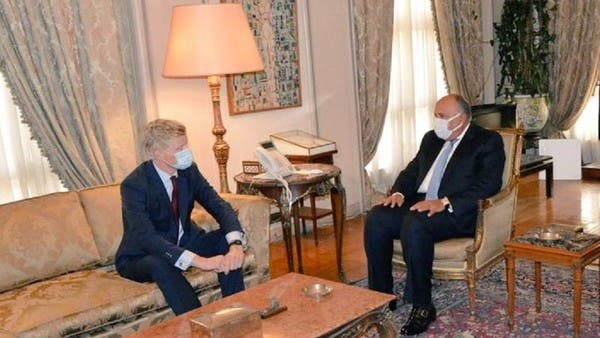 The Special Envoy of the Secretary-General of the United Nations to Yemen, Hans Grundberg, said today, Wednesday, that the attack on Marib undermines the chances of reaching a negotiated settlement of the conflict.

Grundberg confirmed in a press statement, at the conclusion of his visit to the Egyptian capital, Cairo, that the Houthi attack on Marib had caused repercussions throughout Yemen.

He added, “There is no sustainable military solution to the conflict in Yemen, and all warring parties must de-escalate violence and prioritize the interests of civilians over military gains.”

According to the statement, during his visit to Cairo, Grundberg met with the Egyptian Foreign Minister, Sameh Shoukry, and the Secretary-General of the League of Arab States, Ahmed Aboul Gheit.

The statement indicated that they discussed the importance of Yemen’s stability for the region, the joint responsibility of the countries of the region to avoid further escalation in Yemen, in addition to the recent military developments in Yemen, including Hodeidah, and the deteriorating humanitarian situation.

They also addressed the need to support Yemenis in order to reach a negotiated political settlement to end the conflict.

The UN envoy also met with a variety of Yemeni women and men, including parliamentarians, representatives of political parties, civil society organizations, and media professionals.

Participants stressed the need to de-escalate violence, and focused on the impact of the economic downturn on the lives of civilians.

Grundberg consulted with the Yemeni participants on ways to start an inclusive political dialogue that puts the parties’ demands in the context of a broader Yemeni agenda that includes political, economic and security priorities, according to the statement.

The UN envoy reiterated that there is no sustainable military solution to the conflict in Yemen, calling on all warring parties to de-escalate violence and prioritize the interests of civilians instead of achieving military gains.

Since last February, the Houthi militia, the Iranian arm in Yemen, has escalated its attacks in an attempt to control Marib, but it is facing great resistance from the national army, the popular resistance and tribesmen, with the support of the Coalition to Support Legitimacy.

The Houthi militia has committed massive massacres against civilians and the displaced in Marib, with attacks targeting residential neighborhoods and camps for the displaced with ballistic missiles, drones and various weapons, causing hundreds of casualties, and new waves of displacement for thousands of families, where Marib includes more than two million displaced people.