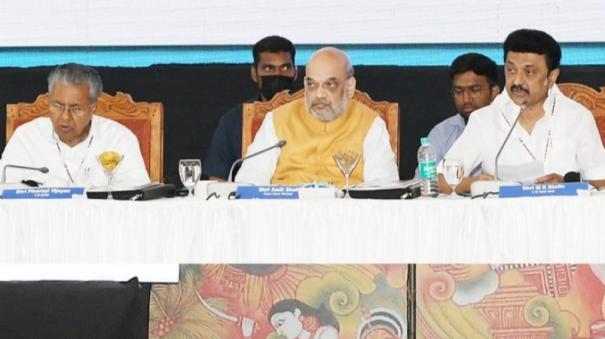 Chennai: States are stuck under heavy financial burden due to imposition of GST tax. Therefore, Tamil Nadu Chief Minister M. K. Stalin said that the compensation period should be extended by another 2 years in the meeting of the Southern Regional Council held in Thiruvananthapuram.

On behalf of the Ministry of Home Affairs, the 30th Southern Zone Council meeting was held yesterday in Kovalam, near Thiruvananthapuram, Kerala, in which the Chief Ministers of Tamil Nadu, Andhra, Telangana, Karnataka, Kerala, and the Lieutenant Governors of Puducherry, Lakshadweep, Andaman Union Territories, and State Police Chiefs participated.

Our philosophy is federalism at the center and autonomy in the states. When this was proposed 50 years ago, we were in the minority. Currently all state governments and state parties are emphasizing this philosophy.

As per the basic philosophy of ‘everything for all’, we have instituted the Dravidian model of governance. We are implementing various welfare schemes to meet the basic needs of the people.

States are stuck under heavy financial burden due to the imposition of GST. Therefore, the compensation period should be extended by another 2 years. Immediate release of disaster relief funds and other funds.

The ‘Tamil Nadu Junior Medical Student Admission Bill’ has been unanimously passed in the Tamil Nadu Legislative Assembly and is awaiting the approval of the Central Government. The Union Home Minister should intervene and take steps to send the draft law for President’s assent.

For setting up airports, state governments usually acquire land and give it to the Airports Authority of India free of cost. Later, when the Airport Authority gives the site to a 3rd party, the State Governments, which have invested heavily, will have to give a larger share in its value.

High-speed rail lines should be constructed between the cities of Chennai, Coimbatore, Thoothukudi and Madurai in Tamil Nadu and between the neighboring states of Tamil Nadu. This will reduce environmental pollution and boost the economy of the state.

In order to attract foreign investments, strengthen the educational structure, industrial sector integration, state governments enter into MoUs with embassies, ministries, agencies and foreign countries, there is a long delay in obtaining the necessary permission and clearance certificate from the Union Ministry of External Affairs. Guidelines should be developed to facilitate this.

The Raigarh-Bugalur-Thrissur 800 KW power line project should be declared as a project of national importance. This will benefit the states that consume more non-renewable energy.

Tamil Nadu has the highest potential for generating wind power from coastal wind in India. Therefore, the Tamil Nadu Government is ready to purchase the entire electricity generated by the Tamil Nadu Coastal Wind. Central government should allow it.

Tamil Nadu, a leader in internal security, maintains law and order and preserves social harmony through continuous surveillance. However, real-time information related to homeland security needs to be shared by intelligence chiefs in southern states. Through this, intelligence chiefs can work better in coordination. Thus spoke Chief Minister Stalin.