Guardiola insists: The Premier League is the most important tournament 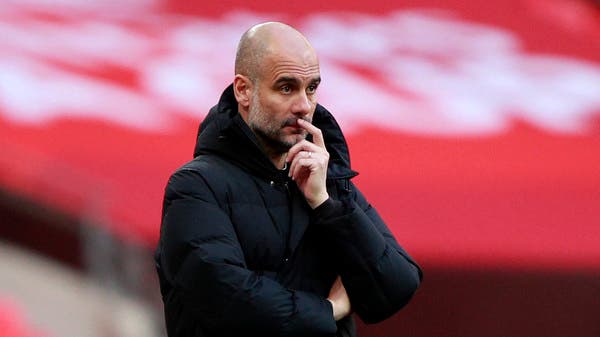 Manchester City are three wins away from their third title in four years in the English Premier League after their 2-1 victory at Aston Villa on Wednesday, as the dismissal of home defender Matti Cash was crucial in the second half.

City rose after shaking their net 20 seconds after the start to take a 2-1 lead before defending defender John Stones was sent off at the end of the first half, but Cash was sent off with two quick warnings that allowed the visitors to maintain their victory.

“We played well,” City coach Pep Guardiola told Sky Sports. We performed well after 10 vs 11 and Cash was sent off. The Premier League title is the most important. We dominated the match when we played 10 vs 11. Stones’ intervention on Jacob Ramsey was late, but it wasn’t intentional. Now I’m so glad we won. If we lost, I would be angry.

Aston Villa coach Dean Smith was furious after his defender was sent off and his team failed to capture the ball for the remainder of the match.

He told Sky Sports: The first warning for Matti Cash was harsh, but the second was due to his recklessness. Our plan was to get the ball to the attacking duo behind the City defense, but we didn’t play in the spaces behind City’s defense enough. We sent out crosses at first but the rest plan I put in was wasted after the dismissal.

Aston Villa remained 11th with 44 points, while City leads the competition with 77 points from 33 games, 11 points ahead of Manchester United, who played 32 games.