Guardiola: What happened against Real Madrid is not a failure 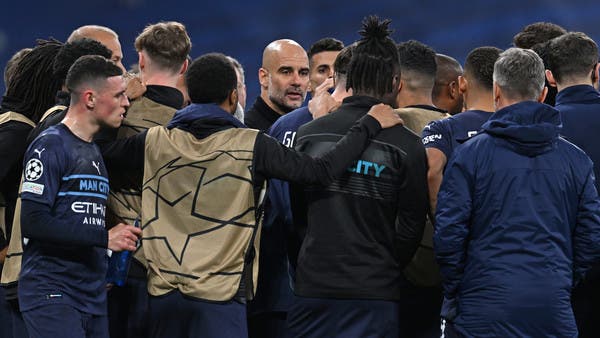 Manchester City coach Pep Guardiola admitted that there are no words that can ease the pain of his team’s exit from the Champions League at the hands of Real Madrid, while focusing his efforts on the only title he can win, which is the English Premier League.

City were close to reaching the final of the continental competition for the second time in a row when they advanced 4-3 and then 1-0 away from home until the 90th minute, but Real Madrid, the record holder in the number of titles (13) managed to score two goals through its alternative striker. Rodrygo scored in the span of one minute to impose a tie on aggregate, before his French top scorer Karim Benzema scored the penalty shootout goal at the start of extra time.

And in a question during the press conference on Friday, which precedes his team’s match against Newcastle in the league, about what he said to the players after the exit, Guardiola said: We did not speak. No words can help, it’s just a matter of time, trying to sleep and thinking about the next goals. On Saturday we will talk.

Guardiola must urge his battalion and raise their morale because he realizes that any misstep in the local league may make his team come out empty-handed this season, after it was a candidate to win more than one title.

City leads Liverpool by a point, four games before the end of the two teams’ journey in the Premier League.

Guardiola commented on the last few meters of the league and his struggle with Liverpool, saying: We do not think about the title, we only think of Newcastle, then Wolverhampton, and then West Ham. Not necessarily listening to what people have to say about what we can achieve.

Guardiola fiercely defended himself and his players, saying: If people consider that what happened is a failure, I do not agree with that. The players realize the difficulty of it, but accept it. I don’t want to get into a discussion. We are sad but we will try again because we were so close.

He continued, “The players wanted to play the final, but competing with a club the size of Real Madrid was fun for us.”

He concluded: “Congratulations to Liverpool and Madrid, as they deserve to go to the final.” We will try next season and if we don’t succeed we will try again.