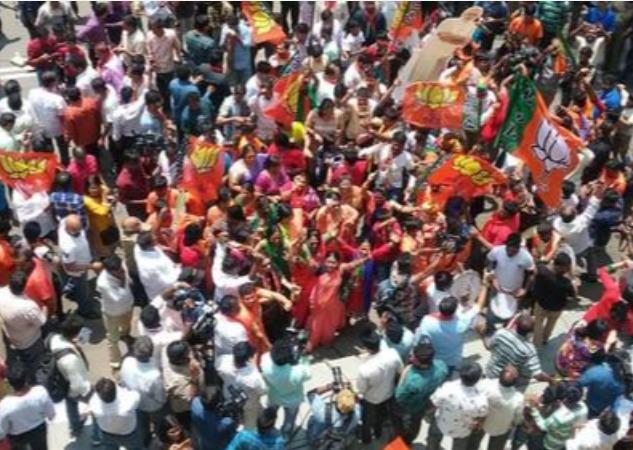 Gujarat Municipal Corporation will rule in a total of 576 wards BJP Has won in 409 wards.

In this situation, the registered votes in the local elections held for 6 corporations have been counting since this morning. From the beginning BJP Has taken the lead in many wards.

Governing a total of 576 wards BJP Has won in 409 wards. The opposition Congress has won only 33 wards. Other parties are leading in 31 seats.

Out of a total of 192 seats in the Ahmedabad Corporation elections BJP The Congress has won 101 seats, 15 seats and the other party one seat.

Out of a total of 52 locations in the Pav Nagar Corporation BJP The Congress has won 31 seats and 5 seats.

Out of a total of 64 seats in the Jamnagar Municipal Election BJP In 43 wards, Congress has won in 6 wards and other parties in 3 seats.

Out of a total of 72 wards in Rajkot Corporation BJP Has captured 68 seats. Congress did not win anywhere.

In 93 of the total 120 wards in Surat Corporation BJP Has won. The opposition Congress did not win anywhere. Aam Aadmi Party, which contested for the first time, has won in 27 wards.

A total of 76 seats in Vadodara Corporation BJP Has won 69 wards. Congress has won in only 7 wards.

Previous articleIf you want to call your face Lavanya Tripathi Covalentra: Hero Karthikeya
Next articleFor the first time in my career .. Dil Raju congratulates ‘Nandi’, a movie that has nothing to do with me