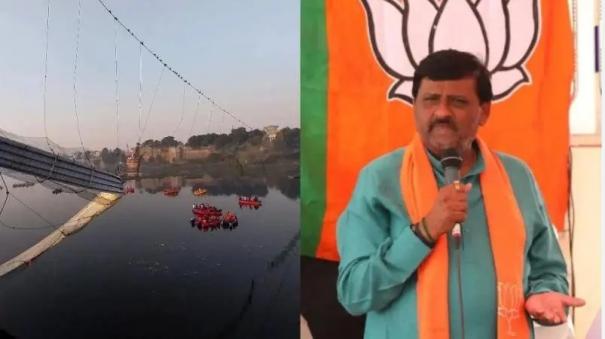 Morphy: The BJP candidate has won the Morbi constituency in which 135 people died in the suspension bridge collapse accident.

On October 30, 135 people lost their lives when a suspension bridge across the river collapsed in Morbi, Gujarat. More than a hundred people were injured. It is considered to be the worst disaster in the country in recent times. The bridge was renovated and opened a few days before the accident. This led to criticism of the BJP government.

It was also said that this accident will reverberate in the recent elections. As a result, seat was not given to Brijesh Merja as sitting MLA in Morbi constituency. Instead, Kandilal Shivlal, a five-time MLA from the BJP, was announced as the candidate. Kandilal has again won the Morbi constituency despite being told that the accident will affect him.

BJP’s Kandilal, who had been leading the polls since the beginning of the Gujarat polls, has won by a margin of 62,079 votes, defeating Congress’s Jayantilal Jerajbhai Patel and Aam Aadmi Party’s Pankaj Ransaria. Kandilal Amrutia got 113701 votes and Patel got 52121 votes. Aam Aadmi Party candidate Pankaj Ransaria got 17261 votes.

When the bridge collapsed, Kandilal accelerated rescue operations. He jumped into the river for rescue operations and saved some people. These videos then went viral. He was hailed on the web as the “Morphy Hero”. After that BJP declared him as the candidate and now he has won.

Sonia was alone in Parliament as Congress leaders could not come