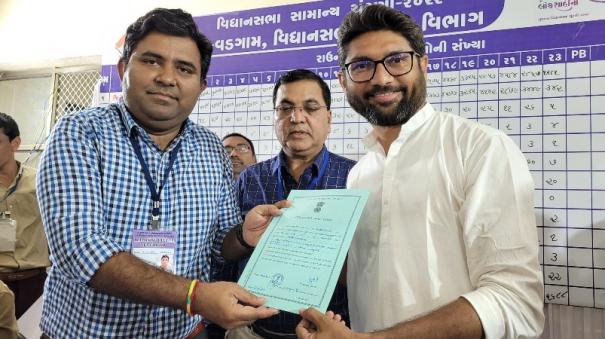 Banaskantha: Jignesh Mevani has won again as the MLA of Vadgam constituency in Gujarat.

Jignesh Mevani recaptured the Vatcom constituency by getting 4,922 votes more than BJP candidate Manilal Jethabhai Vakhela. Jignesh got a total of 94,765 votes with 48 per cent votes while BJP candidate Manilal polled 89,837 votes. Even though the Congress suffered a severe setback in Gujarat, Jignesh, who contested on behalf of the party, was seen as the winner.

During the last 2017 elections, Jignesh contested as an independent and won the same constituency. At that time, the Congress did not field a candidate in this constituency saying that it would support him. Manilal Jedhabhaiwe was the MLA from 2012 to 2017 in this constituency. Manilal quit the Congress and joined the BJP to deny a seat to Jignesh. At the same time, Jignesh was appointed as the working president of the Gujarat Congress. Subsequently, he contested the elections this time against Jignesh on behalf of the BJP in Manilal Wadcom constituency. Jignesh has won despite tough competition.

Why is this win important?: Jignesh Mevani. He is prominent among the three young leaders who are challenging the BJP in Gujarat. He is known as the face of the victimized Dalit people in Gujarat. More than three lakh people gathered in the rally held by him to condemn the brutal attack on a cow skinning Dalit family in Una taluk.

Born in a caste family in Gujarat, Jignesh Mevani worked as a journalist in Mumbai. The rally he organized against the attack on Scheduled Castes in Una gained national attention. He started an organization called Rashtriya Dalit Adhikari Manch and continues to raise his voice for the demands of the Scheduled Castes including land rights. After joining the Congress, he faced a lot of pressure. He stood in the polls this time amid several crises, including his arrest by the Assam police for making comments defamatory of Prime Minister Modi and inciting sectarian animosity.

Wadgam constituency in Banaskantha district is a constituency with a large majority of Muslim and Dalit voters. About 90,000 Muslim voters constitute a third of the 2.94 lakh electorate. There are 44,000 Dalit voters and 15,000 Rajput voters.

Jignesh’s victory is seen as the most important despite the campaign from Manila, which left the Congress and joined the BJP, and despite the severe pressures from the opposition.

After the victory, Jignesh said, “I thank the people of Vatcom constituency for giving me a positive verdict. This victory shows the faith my constituents have placed in me. I see my victory as a responsibility to further improve the welfare of the marginalized sections of the society.”