Guterres: We will redouble efforts to save lives in Ukraine 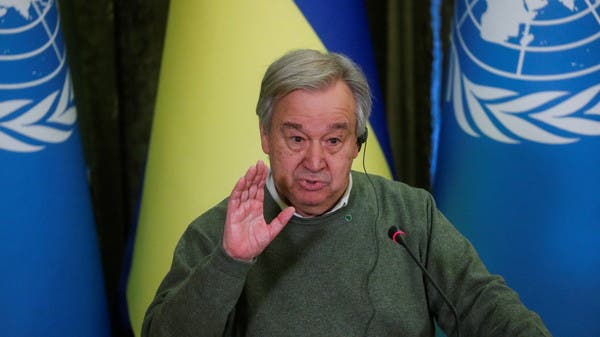 On Friday, United Nations Secretary-General Antonio Guterres stressed the redoubling of efforts to save lives and reduce human suffering in Ukraine.

“I am touched by the resilience and courage of the Ukrainian people. My message to them is simple: We will not give up,” he added on his Twitter account.

He also said that the United Nations will double its efforts in this war, as in all wars, adding, “Civilians are always the ones who pay the biggest price.”

I was moved by the resilience and bravery of the people of Ukraine. My message to them is simple: We will not give up.

The @UN will redouble its efforts to save lives and reduce human suffering. In this war, as in all wars, the civilians always pay the highest price. pic.twitter.com/dd1OsyzAOb

Earlier today, the Russian Defense Ministry announced that it had carried out a “high-precision” air strike on Kyiv, while United Nations Secretary-General Antonio Guterres was visiting the Ukrainian capital.

Kyiv was subjected to Russian bombardment, Thursday evening, coinciding with the visit of the highest UN official, in the first strikes of its kind targeting the capital since mid-April, according to AFP correspondents.

AFP reporters also saw fire engulfing a floor in one of the capital’s buildings and smashed windows, while large numbers of security and ambulance personnel were deployed in the place.

While the Ukrainian presidency sharply criticized him, due to the schedule of that visit, which was supposed to start in Kiev, according to Zelensky, who said during one of his video speeches, commenting on the visit of the UN official, “I do not see corpses on the streets of Moscow,” referring to the destruction and death. Which hit the Ukrainian capital, which requires a strong message of support from the United Nations, embodied by visiting it first.