Haaland decides his fate within days 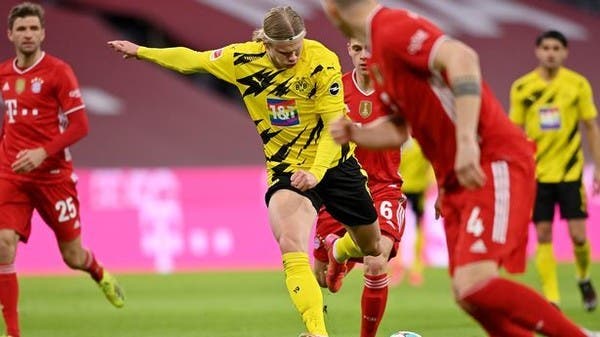 Sebastian Keil, the next football director of the German club, Borussia Dortmund, confirmed that the future of the attacking star, Erling Haaland, is expected to be decided in the coming days, as Haaland appears close to leaving the team, and there is a state of anticipation regarding his next destination.

The name of Dutch star Haaland, 21, was widely associated with the media by moving to Manchester City next July, in light of a clause in his contract that allows him to leave.

The order was suspended for some time due to the circumstances of the death of the player’s agent, Mino Raiola, early last week.

“I think it will be clear next week,” Sebastian Keil told the “Sport 1” TV channel on Sunday.

“I think we’ll go ahead with Karim this week,” Kiel said.

Dortmund, who occupies second place in the German league behind the title-winning Bayern Munich, has already settled the contract of central defenders Nico Schlutterbeek, from Freiburg, and Niklas Sole, from Bayern Munich, to join the team next season.

On the other hand, Sebastian Keil said that he intends to keep Marco Rosa as coach of the team next season, after he seemed hesitant earlier about this matter.

Sebastian Kehl caused a stir on Saturday after Dortmund’s 3-1 victory over Gruether Fürth in the German Bundesliga.

When asked if Rose will continue to coach the team next season, Kiel told Sky Network that he thinks so.

“It was a really unfortunate formulation of words,” said Sebastian Kell, the former Dortmund midfielder who will move from the presidency of the club’s professional committee to the position of football director at the end of the current season, in statements to the “Sport 1” TV channel.

“I can clearly say that I am planning next season with Marko,” he added.

He said that he would discuss some matters with Rose after the season, which is currently witnessing the presence of Dortmund in second place in the German League, nine points behind Bayern Munich, who have already won the title, and also witnessed an early exit from Dortmund from the European League and German Cup.